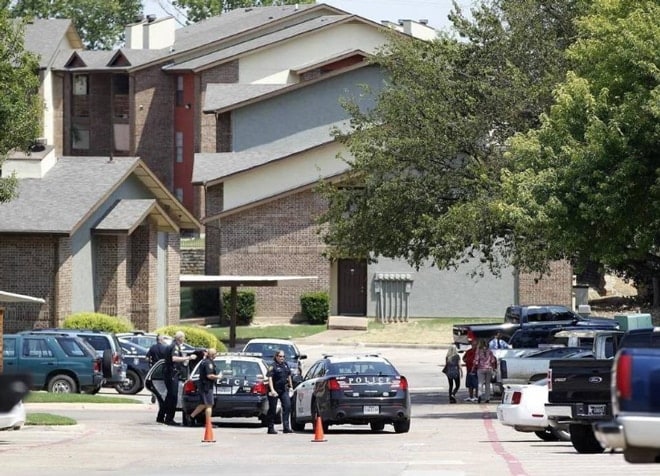 When authorities arrived on the scene, the armed resident was outside in the parking lot and the suspect was found dead in the living room. (Photo: Star-Telegram)

A man is dead after a broad daylight home invasion at a Forth Worth apartment this week turned into a shooting with the resident protecting all six people inside, including a 1-month-old baby.

The Star-Telegram reported the two suspects burst into the apartment just after 1 p.m. Tuesday and demanded “everything.” According to resident Brad White, who was in the apartment with his girlfriend and newborn baby, the suspects got into a scuffle with those inside before the residents demanded the suspects leave.

One of the suspects heeded to the commands of those inside, but the second suspect, who was later identified as Larry Chism, 36, of Crowley, refused to back down or leave. White said at that point, Blake Estrada Severin, 21, who also lives in the apartment, did not delay further and shot Chism in the chest and shoulder.

“My friend didn’t hesitate – he knew I had a baby in there and he shot him,” White said.

When police arrived a short time later, Severin met them in the parking lot of the apartment complex and admitted to shooting the man. However, Severin claimed he acted in self-defense, and at this point authorities, who referred to the ordeal as a home invasion robbery on the incident report, have not revealed any evidence that suggests otherwise.

Responding officers found Chism in the living room of the apartment. He was pronounced dead at the scene.

Daniel Segura, spokesman for the Fort Worth Police Department, confirmed that two of the people who were in the apartment at the time of the shooting were taken into custody for questioning, but were later released and no arrests have been made at this time.

Jessica Bryan, 21, who also lives in the apartment said they were formerly friends with Chism and a little over a week ago he came around waving a 9mm handgun in their faces. However, authorities did not say whether Chism was armed during the attempted robbery.

Bryan said when the suspects burst into the apartment they were just trying to get the baby out of harm’s way, but by the time the incident was over, she was covered in Chism’s blood.