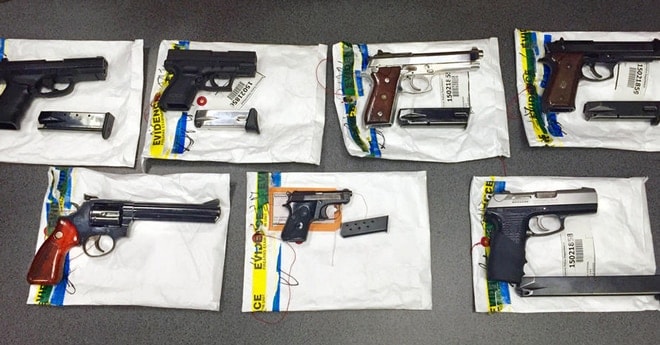 One gun was found in a hidden drop-down style ceiling and another was found wrapped in a plastic bag and hidden in a potted plant. (Photo: Baltimore Sun)

One of seven guns discovered during a July raid of a Baltimore office for an anti-violence program was found to have been used in at least three different crimes, recently released documents revealed.

Authorities executed a federal search warrant at Safe Streets, a city-funded program that typically hires ex-convicts to serve as neighborhood mediators, after local law enforcement followed two robbery suspects to the office during a pursuit. Police discovered several guns hidden in various places around the office, including a “drop-down” ceiling and a potted plant, as well as numerous items believed to be used in heroin distribution, according to reports by the Baltimore Sun.

Nine people were arrested during the raid, including two Safe Streets employees, who have since been terminated from their positions with the program, city Health Commissioner Dr. Leana Wen confirmed. Furthermore, the office has since been closed – at least temporarily.

Among the guns found during the raid was a Ruger semi-automatic handgun, which was later determined to have been stolen during a burglary last year. A firearms examiner with the Baltimore Police Department found that the Ruger was used in a nonfatal shooting in April and two shootings in July, including one on the day before the gun was discovered at the Safe Streets office.

But despite the negativity surrounding the office, city officials still remain supportive of the program, which has five locations across the city. Officials say the program has helped to reduce violence and Wen hopes to create six additional offices, but said they will be more careful in the future.

“We very much believe in the efficacy of Safe Streets,” Wen said. “We are implementing new security protocols and better background checks. We really believe in recruiting ex-offenders and giving people a second chance.”

In addition to providing ex-convicts with a second chance, the offenders are helpful in the program because of the credibility they have in the neighborhoods, Wen said in July. She also emphasized that the July incident was a reflection of the individuals involved and not the program itself.