Cops shake down stargazing students after mistaking telescope for gun 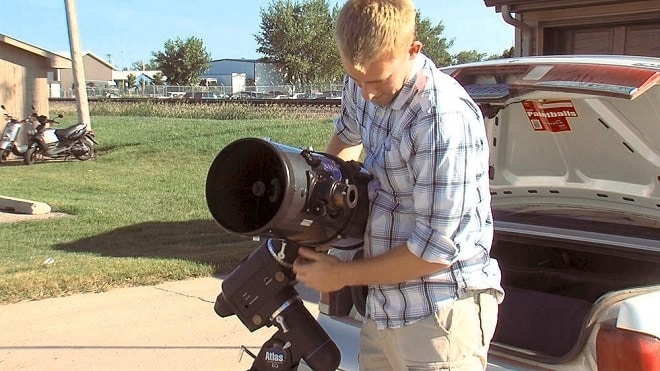 Two North Dakota college students checking out the nighttime sky at first thought officers from the Fargo Police Department were part of a prank.

Levi Joraanstad and Colin Waldera, students at North Dakota State University, were using their telescope by the garage behind their apartment when they were blinded by tactical lights from three or four armed officers shouting commands.

“I was kind of fumbling around with my stuff and my roommate and I were kind of talking, we were kind of wondering, what the heck’s going on?” Joraanstad told the Grand Forks Herald.

The officers responded after one observed the space enthusiasts from a distance and took their optics as a rifle and Joraanstad’s sweater as a tactical vest.

The NDSU junior at first thought the surreal situation was some kind of prank from classmates, and ignored the orders from officers.

“This is pretty dumb that these guys are doing this. And then they started shouting to quit moving or we could be shot. And so at that moment we kind of look at each other and we’re thinking we better take this seriously,” said Joraanstad.

While the incident ended without injuries or arrests, and officials have apologized, posts to the Fargo Police Department’s Facebook page have been the subject of critical comments involving telescopes and stargazing.

The agency, which has not had a permanent chief of police since Keith Ternes resigned last fall amid low morale and management complaints, has nine candidates now vying for the job. The city council expects to have a new chief named within 60 days.

Meanwhile, the stargazer altercation tale is already circling the globe, appearing overseas including on a popular national news site in Indonesia.

NDSU, home to some 14,747 undergraduates, began their fall session Monday.