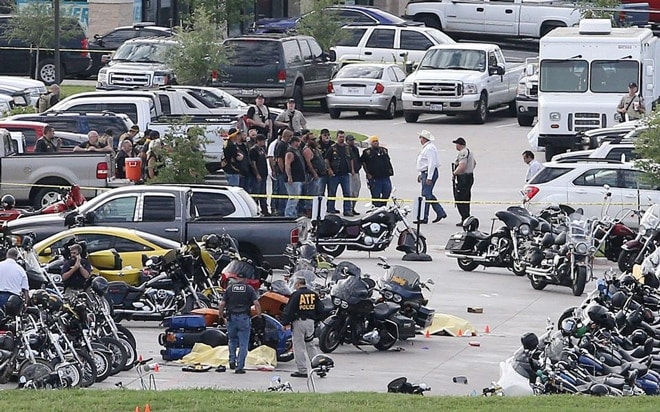 Initial reports were that authorities confiscated upwards of 1,000 weapons, but that number was later cut in less than half, with the ATF still in possession of about 475. (Photo: Waco Tribune-Herald)

The Texas Court of Appeals has determined over the last week that officials had probable cause in only five of the 177 arrests following a shootout between two rival biker gangs and local, state and federal authorities outside of a Waco restaurant in May, with just over a dozen more cases set to be reviewed over the next two weeks.

Among those still facing charges are a Bandidos chaplain and a husband and wife. Officials also found probable cause against Bandidos members Marcus Pilkington, 36, and Reginald Weathers, 43, who ascertain they are “being illegally confined” and authorities lack sufficient evidence to prove they engaged in organized criminal activity the day of the shootout, the Waco Tribune-Herald reported.

Nine men were killed during the exchange of gunfire that day and another 20 were injured. Authorities confiscated more than 475 weapons, including 151 firearms. No other innocent civilians or law enforcement were injured during the shootout.

The incident remains under investigation, but a great deal of questions still remain, including who fired the fatal shots, which authorities have yet to disclose. However, Waco Police Chief Brent Stroman confirmed in June that a total of 12 rounds were fired by three Waco officers that day, leaving the remaining rounds at the hands of either the bikers or state and federal authorities.

At last count, 44 shell casings were recovered from the scene, including multiple .223 rounds, but ballistics evidence has not been made public at this time, despite the fact that autopsy reports were already released earlier this month, including vague descriptions of the injury-causing projectiles.

Weathers said the whole incident unfolded over a dispute about a parking space and a perceived act of disrespect, but while the melee initially involved the bikers, it’s unknown when authorities engaged.

Weathers said he and more than a dozen other members were outside of the Twin Peaks restaurant, while numerous members of the Cossacks, a rival biker gang, were near the patio area. A member of the Cossacks allegedly yelled at Bandidos club President David Martinez, saying he could not park in a particular space, but Weathers said he had not even pulled into the space at that point. Weathers, feeling his club president had been disrespected, then told the Cossacks member not to talk to his president that way, to which that member responded by punching Weathers in the face, he alleges.

Weathers said he covered his face in a defensive stance, but was soon pushed to the ground. Moments later, he heard gunshots, what he described as a “double tap.” Weathers was shot in the arm, but admitted that he did not know where the first shots came from because he was engaged in a fight with other bikers at the time.

Weathers said altogether the entire incident only lasted about four or five minutes.

Correction: We reported the Bureau of Alcohol, Tobacco, Firearms and Explosives was heading the investigation. That is incorrect. The agency has assisted the investigation at the request of the Waco Police Department.