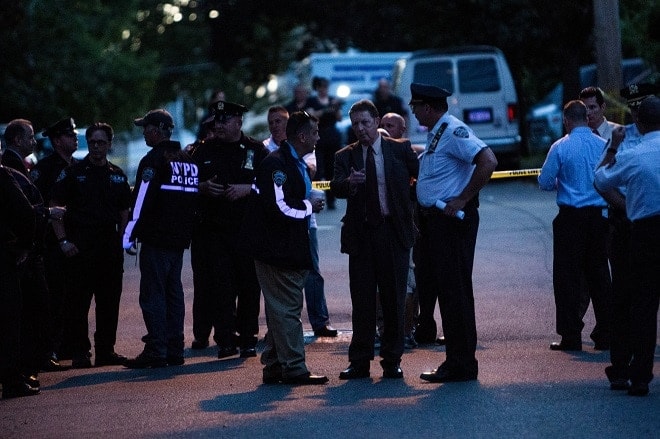 A gun deal turned robbery with a replica firearm that ended in gunplay in a residential neighborhood claimed the life of an innocent last weekend. (Photo: Uli Seit/The New York Times)

Killed was Felix Kumi, when the officer, part of the NYPD’s Firearms Investigations Unit, fired between 11 and 21 shots at a fleeing suspect, who was also injured. Kumi, shot twice in the torso, was taken to Jacobi Hospital where he later died.

“I wish to express my profound sorrow and sympathy to the family of Felix Kumi, an uninvolved bystander who was struck and killed by police gunfire during an undercover gun-buy operation last night,” said Police Commissioner William J. Bratton in a statement. “Mr. Kumi was blameless, and this tragedy has tested and tried his family. I pray that they may find comfort in their hope of resurrection and awakening, and I tender the Department’s support and service in their grief.”

As reported by the New York Daily News, the officer had previously bought 25 guns on 10 occasions from an illegal gun dealer, Jeffrey Aristy, 28, and had brought $2,400 with him to purchase two more handguns.

After meeting Aristy in the Bronx for the deal, the subject directed the officer to a street in Mount Vernon, bordering New York City. There, 37-year-old Alvin Smothers entered the undercover officer’s car and held a replica gun to his head, robbing him of the buy money.

The officer and his backup team then pursued Smothers and, after reportedly pointing the replica gun at police, they shot him three times. It was in this  exchange of gunfire that Kumi, in the area to pick up his car from a repair shop, was also mortally wounded.

As noted by the New York Times, several bullets also hit vehicles in the area and at least one went through the front door of a home in the residential area near Beekman Avenue.

Smothers, taken to the same hospital that Kumi was, is in stable condition with gunshot wounds to his arm and shoulder. According to the New York Post, he has an extensive criminal history in New Jersey including gun and robbery charges. Police recovered both his replica gun and the stolen buy money from the scene.

“My father died a faithful man,” his heartbroken daughter Rachel Kumi, 25, said, fighting back tears in front of her dad’s home. “It’s a travesty that this happened. He loved us and he touched everyone he met.”

Alleged gun dealer Aristy, along with his wife and an accomplice, were arraigned Sunday on multiple gun and drug charges.

The officer involved in the shooting, who has not been identified, is a 10-year veteran of the department.

Friday’s incident opens the latest chapter in the NYPD’s ongoing and aggressive war on illegal guns in the city. After record-breaking take downs of gun trafficking rings in 2013, prosecutors last week celebrated the conviction and sentencing of a “gun family” chief who sold 151 guns to an undercover officer in 13 transactions through March 2014.

Like the Mount Vernon sting gone tragically awry, those deals were also conducted in a residential neighborhood.