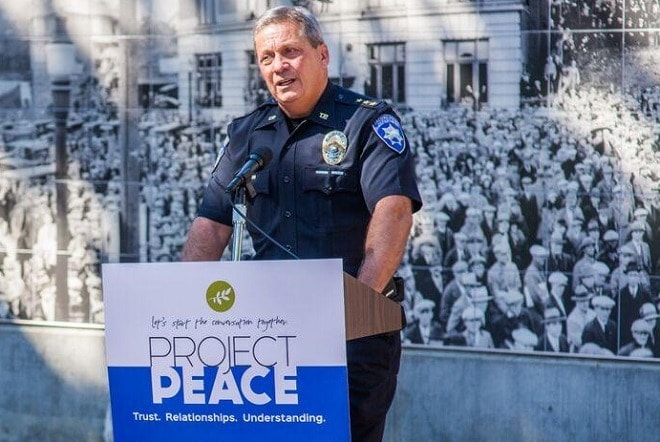 Tacoma Police Chief Don Ramsdell and others are campaigning for an anonymous drop box for unwanted guns in the city. (Photo: Brian Cox/City of Tacoma)

Officials in Washington’s third largest city would like to see a standalone drop box set up to allow residents to get rid of their guns.

The concept, backed by police, the city’s gang reduction project coordinator, and members of the city council is part of an ongoing gun safety campaign started last year. While the city already allows the public to turn in guns to the police, those supporting the drop box contend that it could garner firearms from those unable or unwilling to contact authorities.

“If we get one or two, guess what? That’s one or two more guns not being accidentally or intentionally used,” City Councilwoman Victoria Woodards told the News Tribune. “That’s one less gun on the street.”

The logistics of the receptacle are still being worked out, with discussions on how to keep the box secure, how to cushion guns being deposited, and a location for the box.

City officials admit it is a new concept.

While police in the United Kingdom have set up anonymous turn in bins to get knives off the street after a series of stabbings, using them for guns hasn’t been explored.

“Nobody’s never done this before that we’re aware of,” said Melissa Cordeiro, the city’s gang reduction project coordinator. “That’s why we have to be really careful and really think it through.”

Corderio’s department runs the city’s ongoing Gun Safe T Education campaign launched last June, which asks parents and youth to take a pledge to help eliminate violence while advocating locked storage of firearms providing a mechanism for the surrender of unwanted firearms to local police. However, as noted on the campaign’s website, those seeking to turn guns in still have to provide their name and contact information.

Guns turned in will be destroyed.