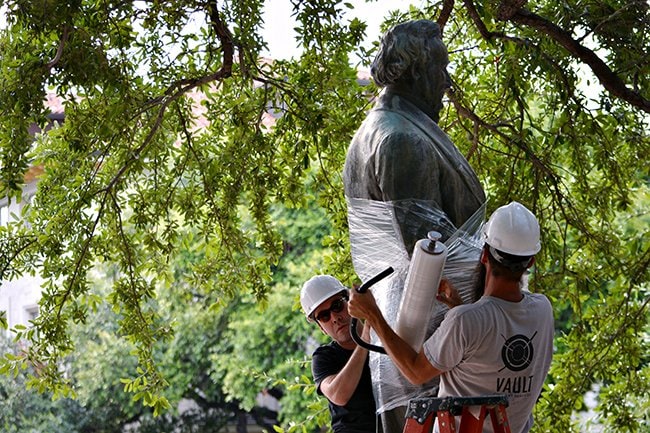 A statue crafted in the likeness of Confederate President Jefferson Davis was removed from the University of Texas at Austin campus Sunday following months of debate over the meaning of its legacy.

The New York Times reported the college decided to remove the Civil War monument from its pedestal after a legal appeal filed by the Sons of Confederate Veterans to keep it in place was rejected.

Hearing were held Thursday and Friday calling for an injunction to halt the statue’s removal, but a judge ultimately denied the motion, the college’s newspaper, the Daily Texan, reported.

The school’s president, Gregory L. Fenves, this month said keeping the statue on the main mall was “not in the university’s best interest” after an earlier resolution passed by the student government called for its removal.

Instead, the statue will be placed in the Dolph Briscoe Center for American History, to be reportedly included in the country’s largest collection on the history of slavery.

The college paper reported the Davis statue will be taken to the history center once renovation of the building has been completed in approximately 18 months.

Confederate symbolism has been a major point of contention in recent months, following a gruesome shooting at a historically black church in South Carolina in June. The shooter reportedly had racist sympathies and was photographed with a Confederate battle flag, which has been used by admittedly racist groups to further their hate-filled agendas.

The shooting prompted officials in that state to launch legislative efforts at removing all Confederate flags from government grounds and sparked a national debate on racism in America.