Hawaii police to destroy $575,000 in surplus guns to keep them 'off the streets' 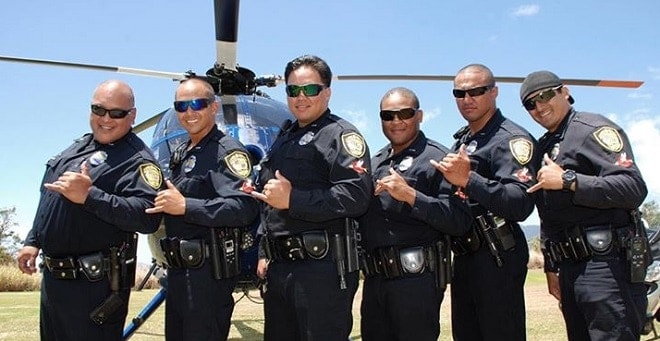 The 2,200 officers of the Honolulu Police Department may be happy about their new guns, but their old ones are sparking controversy. (Photo: HPD)

After buying new sidearms for its officers, the Honolulu Police Department is moving to destroy its surplus pistols, some new, over the protests of gun rights groups.

HPD recently entered into a deal to purchase 2,000 new Glock 17s for $818,000 to phase out their existing inventory of Smith and Wesson and Sig Sauer pistols.

Valued at over a half million dollars if resold, the surplus guns will instead be destroyed at the decision of city officials.

“Mayor Caldwell and the Honolulu Police Department agreed that they would not allow the guns to be sold to the general public and end up on the streets of Honolulu,” says the department in a statement. “The same goes for selling individual gun parts that could have been used to assemble a gun.”

The 2,300 surplus guns in question are mostly S&W Model 5906 9mm semi-autos, including some 200 unissued guns still new in their boxes, as reported by Hawaii News Now. The guns, acquired in the 1990s, could have been sold for $250 each or as parts for a lower amount.

Individual officers, many seeking to buy their previously issued guns in some cases carried by them for years, have likewise been told they could not purchase them.

A plan to donate some of the guns to outlying U.S. territories, such as cash-strapped American Samoa, fell through, leaving HPD with options they felt were unacceptable, so the city has moved to scrap the firearms.

This has state gun rights advocates, who take the disposal of pistols bought with public funds as a slap in the face of lawful firearms owners, seeing red.

“To claim that selling these guns was going to ‘put them on the streets’ as if to infer they were destined to fall into the hands of criminals seems a bit irrational and alarmist considering the rigorous processes that are currently place for the sole purpose of preventing that type of diversion and that law abiding citizens go thorough each and every time they purchase handguns,” reads a letter sent to Mayor Caldwell and city leaders from Lessons in Firearms Education and the Hawaii Rifle Association.

Moving to the mainland, pro-gun groups such as the Second Amendment Foundation and National Rifle Association also slammed the move by Honolulu officials.

“Alarmingly, this falls right in line with the typical anti-gun agenda,” wrote Mark Chestnut in an NRA publication. “The fact that the city doesn’t trust its own highly trained officers to purchase the very guns they have carried on the job, and doesn’t trust private citizens looking to exercise their constitutional rights, sounds like something straight out of a Michael Bloomberg gun-ban training manual.”

Hawaii has some of the country’s strictest gun laws and has required registration of all modern firearms since 1994. If one moves to the state and brings in a firearm of any description, one must register the firearm within 72 hours after the firearm enters the state.

Those seeking to acquire a handgun have to attend mandatory training, pass an extensive background check, and undergo a 14-day waiting period.