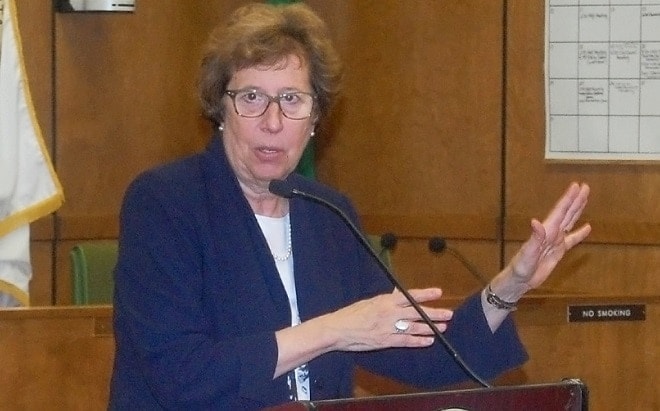 State Sen. Lois Wolk, D-Davis, saw her bill to close what she terms a loophole in the Gun Free Schools Act, pass the Assembly with ease this week. (Photo: Barry Eberling/Daily Republic)

A Senate bill to end the current exception for lawful concealed carry on school campuses sailed through the Assembly on Tuesday by more than a 2-1 margin.

The measure would remove the long-held ability of licensed concealed handgun permit holders to carry on K-12 and university campuses in the state.

It passed the Senate’s Appropriations Committee by a unanimous vote in May then met with more of a GOP response in a 23-12 floor vote by the entire Senate in June, sending it to the Assembly where it cleared in a largely partisan 54-24 roll call this week.

Although there are few if any instances of permit holders committing crimes on campus to cite, the bill’s sponsor feels its a loophole in the law that needs to be closed.

“Many would be surprised, as I was, to learn that California law currently allows concealed firearms on any campus, even on an elementary school campus,” said State Sen. Lois Wolk, D-Davis, in a statement. “With today’s Assembly vote, we are close to sending the Governor a common sense bill that will close this loophole in our Gun Free Schools Act, helping our school officials control firearms on their campuses.”

Wolk’s proposal, SB 707, would drop the current exception in the California Gun Free School Act that allows for those with a permit to carry on campus. The measure would prohibit those with a concealed carry permit from having their firearm with them on any school property in the state to include K-12 campuses, school apartment buildings, common areas, college and university campuses, and parking lots, while giving college authorities the power to later allow firearms in areas as they deem appropriate.

It would allow permit holders to approach inside the 1,000 exclusion zone surrounding campuses, but not actually set foot on the grounds with a gun.

Exemptions are in place for active and retired police and for ammunition carried in a locked container carried in the trunk of a vehicle on school property.

If enacted, permit holders who carry on school grounds would be liable for a felony charge resulting in as much as five years in state prison.

“California’s college campuses and K-12 schools should be sanctuaries for learning free from the fear of gun violence,” said Peggy McCrum, president of the California Chapters of the Brady Campaign to Prevent Gun Violence. “If the Governor signs the bill it will make schools safer and decrease students’ risk of being injured or killed.”

A host of gun rights advocacy organizations including Gun Owners of California, the California Rifle and Pistol Association, the National Rifle Association and the Firearms Policy Coalition oppose the measure.

“Senator Wolk’s proposal is the epitome of a bad solution in search of a non-existent problem – and, if passed, will one day be looked upon as the irrational, dangerous, and life threatening political move that it is,” FPC President Brandon Combs said of the legislation earlier this year.

The bill now proceeds to the Senate where a likely concurrence vote would send it to Gov. Jerry Brown’s desk for consideration.