Harvey Lembo believes that because he is disabled and uses a motorized wheelchair to get around, criminals may think he is an easy target. (Photo: Bangor Daily News)

A 67-year-old man, frustrated after being targeted numerous times for burglaries, purchased a handgun Monday for protection, only to use it just hours later after he awakened to find an intruder in his Rockland, Maine, apartment.

Harvey Lembo’s home has been broken into a total of five times, the most recent incident being just last month when $1,000 in cash and numerous prescription medications were taken. But Monday morning Lembo was prepared to protect himself and his belongings with a recently acquired 7mm Russian-made revolver that he kept under his pillow, according to reports from the Bangor Daily News.

Lembo grabbed the gun after he was awakened around midnight and saw the shadow of a figure pass through the kitchen and into the living room. There Lembo found the suspect, who was later identified as Christopher Wildhaber, 45, sifting through his prescriptions and Lembo was not willing to play.

Lembo trained his gun on the intruder and instructed him to sit down while he called the police. He warned Wildhaber that if he moved, he “would blow his brains out.” The suspect initially heeded the warning offered by Lembo, but while the man was on the phone with the 911 dispatcher, Wildhaber made the mistake of trying to make a run for it. 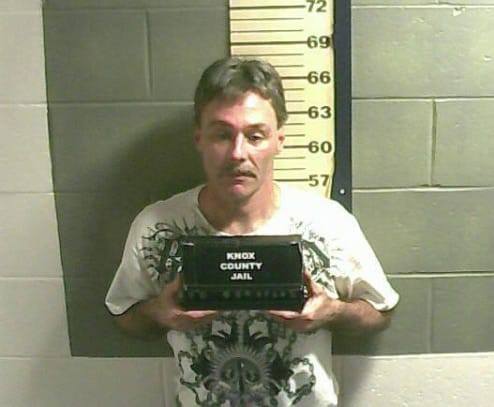 Christopher Wildhaber, who has multiple domestic assault convictions, was out on parole during the break-in. (Photo: Knox County Jail)

As Wildhaber jumped up, Lembo fired a single shot, striking him in the shoulder. Wildhaber took off and ran out of the back door, leaving a trail of blood behind him.

A short time later, police found Wildhaber hiding in a nearby wooded area and after a brief struggle, he was subdued and apprehended. He was transported to a local hospital to receive treatment for the gunshot wound, which was non-life threatening. He will likely face charges for burglary as well as probation violation. Wildhaber was on probation after serving nine months of an originally three year sentence for felony domestic violence assault.

The incident remains under investigation and while authorities did not expect Lembo to face any charges, ultimately the decision will land on the district attorney.