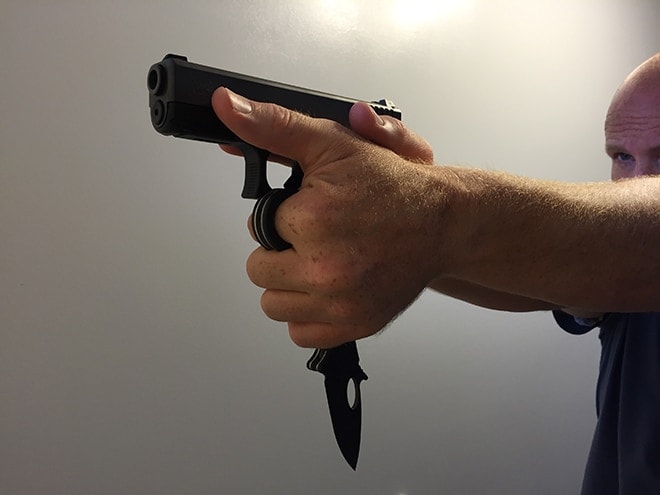 The author with his EDC pistol and Emerson bullnose Karambit. Note the two handed grip, made possible by the blade’s design. (Photo: Jeffrey Denning)

When training for the realities of mortal combat, it’s important to consider what to do in case someone tries to disarm you. This is especially true if you’re carrying in open carry fashion, like I do in my law enforcement capacity.

Now a lot of people say don’t bring a knife to a gunfight,  but knowing what I know about combat, I feel that’s an ignorant statement.  Edged weapons have their place as a lethal tool, not to mention their use as a lifesaving tool in innumerable survival and emergency situations: being able to cut a seatbelt away from an injured crash victim when the car is about to go up in flames, for instance.

Should the Zombie apocalypse occur—something that I don’t believe will happen but if it does—and as a citizen looking to survive such a calamity, I’ll be mounting my USMC Ontario Knife Company bayonet on my camo AR-15.  But, since that’s not the most practical, nonetheless a tacticool, item, I opt to carry a folding blade—and not just any folder, but an Emerson bullnose Karambit.

The Karambit is a curved blade, but the bullnose and CQC7 editions from Emerson Knives, are not curved. This allows straight stabs, thrusting puncture wounds that can be more devastating and lethal than slashes.

If someone’s going to try and disarm me, I’ve been trained in some less lethal techniques, but if someone is trying to kill me and I’m fearing for my life, I’ll stab someone just like I’d shoot them.  The first difference in learning to injure someone with a blade rather than a gun is psychological: lethal confrontations, whether it’s with a gun or a knife, are gory, violent and mentally stressful, but perhaps more so with a knife. 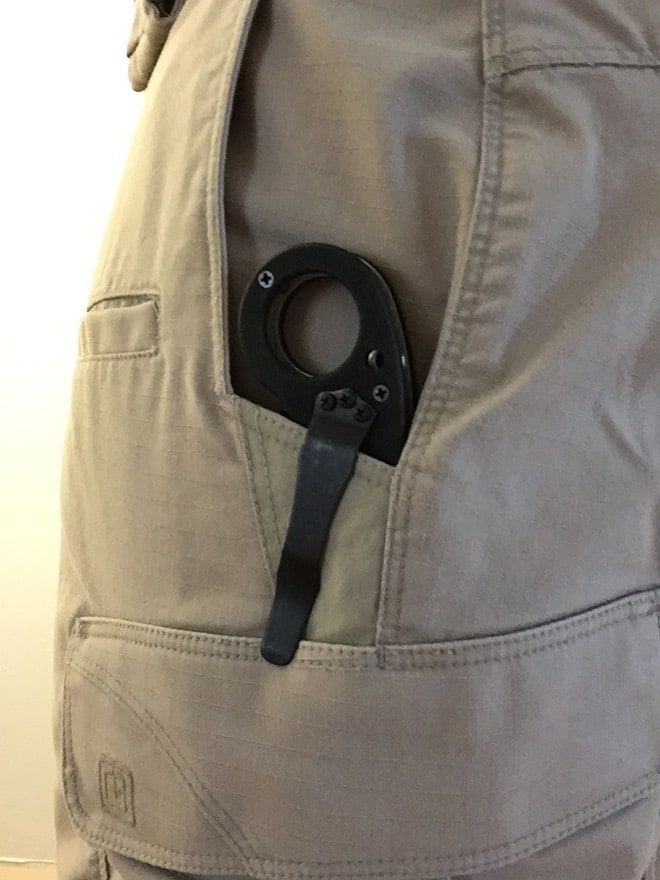 Emerson bullnose Karambit in offhand pocket. This configuration gives me the most stab/shoot options when carrying strongside. (Photo: Jeffrey Denning)

When considering which blade to carry, I want a knife I can use with my off-hand. That way, I can grab my pistol with my dominant hand while grabbing and stabbing with my support hand. The knife I select to complement my EDC handgun needs to have the following criteria:

1. Opens with one hand

The Emerson wave allows the knife to flick open when pulled from the pocket. It’s a brilliant design. This way, all I have to do is grab the blade and thrust my hand towards an attacker since the blade will already be opened.  If the attacker is in front of me and I need to use lethal force, I could either go for his groin/femoral, his guts to eviscerate him or his neck.  All of that is possible with one hand with these blade designs.

As with carrying a firearm, if you plan on carrying a knife before the apocalypse, always check your local laws first.  Some state and local governments enforce laws against certain styles of “unassisted” open knives, knives that lock into place, and blades of certain lengths (usually over 2.5 inches).

Since the original Karamit design is curved, it impedes the user from any other action but slashing. One of the reasons I opted to go with the bullnose Karambit is so I could use a reverse grip hammer fist punch, which is another way of saying an icepick stab. If someone were to attack me from behind and try to grab my gun, I’d swing my blade side around and give several sharp reasons for them to let go of my pistol.

As a shooter, I think the greatest thing about Emerson’s Karambit is the hole in the grip. Since I opt to carry my blade on my left hand, I can use my index finger to grab the blade and yank it out of my pocket. Doing so sets me up perfectly with the grip. This reverse finger-hole grip also allows me to take up a two-handed pistol grip. If I need to shoot with both hands, I can. Or, I can stab then shoot or shoot and stab.

Really, from my experience, it’s impossible to know when such a technique may come in hand.  More than likely, I won’t ever have time to put my knife away during a lethal encounter and with with the hole in the grip, I don’t have to drop my knife in order to stay in the fight.