6 people shot to death in Chicago; 5 in less than 10 hours 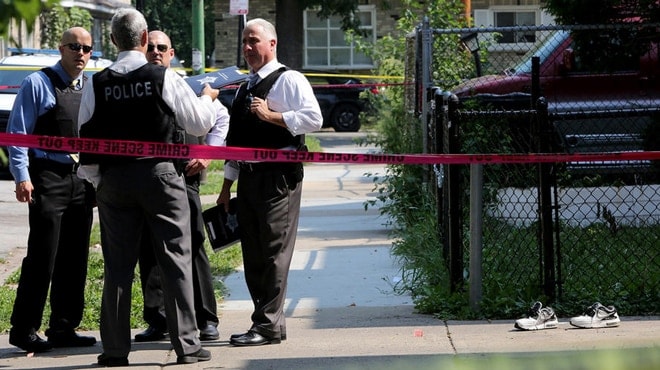 In what appears to be an unsettling trend, a sudden rash of violence in the Windy City overnight and into the morning hours left six people fatally shot, five in under 10 hours.

The violent stint started just before midnight Tuesday when a 16-year-old boy was shot and killed during a drive-by shooting. About 40 minutes later and three miles away, another shooting occurred that claimed the life of a 25-year-old man. Two hours later, another two men were shot and killed, the Chicago Tribune reported.

About 9:40 a.m., a man who had just turned 25-years-old on Saturday was pronounced dead at a local hospital after suffering a gunshot wound to the head while standing outside talking with friends about 40 minutes prior to arriving at the hospital.

No more gunshot fatalities were reported for almost another eight hours, but at 5:30 p.m., three men were shot, including one – a 19-year-old – who was originally listed in critical condition, but eventually succumbed to his injuries and was pronounced dead.

In addition to the six fatalities, at least 11 other people were injured overnight Tuesday and into Wednesday.

Chicago has seen a 20 percent increase in overall homicides so far this year compared with the same time frame from last year, mirroring a national trend among at least 35 large cities across the country, according to reports from The New York Times. The city has seen just under 2,000 shooting victims, more than 300 fatalities, with August being the bloodiest month so far, and February having the fewest number of deaths.

Chicago Police Superintendent Garry McCarthy blames the rise in homicides on a number of factors, including an abundance of guns in the city and the lack of stiff penalties for offenders.

“Across the country, we’ve all found it’s not the individual who never committed a crime before suddenly killing somebody,” Mr. McCarthy said. “It’s the repeat offenders. It’s the same people over and over again.”