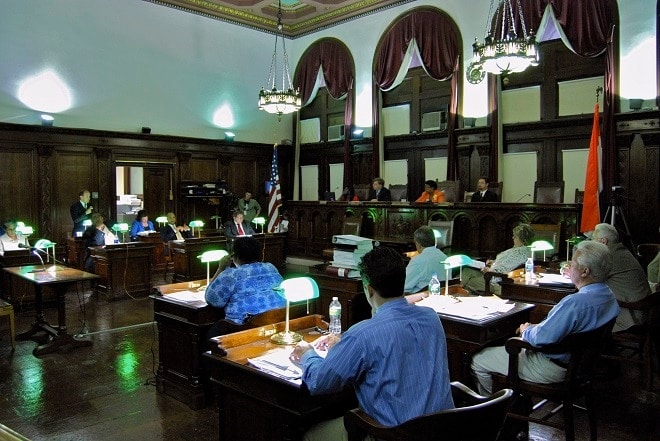 All but one member of the Albany council this week approved a measure requiring gun owners to keep their firearms locked up under penalty of law. (Photo: Wikipedia)

Starting next year, residents of New York’s largest city have to keep their guns locked up or risk up to a year in jail.

This comes after the Albany Common Council on Wednesday voted 14-1 in favor of a city ordinance requiring that all firearms, including rifles and shotguns, be secured inside a locking container or box.

“It is common sense to keep firearms locked up to prevent accidents and injuries, and this legislation goes one important step further by holding adults responsible when firearms are not stored safely,” said the proposal’s sponsor, Councilwoman Cathy Fahey, as reported by the Albany Times Union.

Fahey’s measure, Local Law A-2014, would mandate all firearms, including rifles and shotguns, be secured inside a locking container or box, with penalties for non-compliance ranging to from a $250 fine and 15 days in prison for first offenses to as much as a year in jail for subsequent violations.

Any instance in which a gun deemed improperly secured is involved in a shooting is automatically eligible for the maximum penalty.

Other cities in the state, to include gun control role model Buffalo and Rochester, have similar laws already while mandatory gun lock laws came very close to passing statewide last session in both chambers.

Gun rights groups in the state argue measures such as Albany’s only penalize those gun owners who obey the law.

“The city of Albany would be better served if it looked at root causes of violence, and not the tools that criminals use to carry out that violence,” said NY2A Grassroots Coalition co-founder Jake Palmateer.

“NY2A believes responsible gun ownership is vitally important. However, safe storage laws do nothing to fight crime; have negligible or no impact on suicide rates; and serve only to prosecute the victims of crime,” reads a statement from the group. “Many residential burglaries go unsolved, so if someone has a break-in and a firearm is stolen, the victim would very likely end up the only person arrested.”