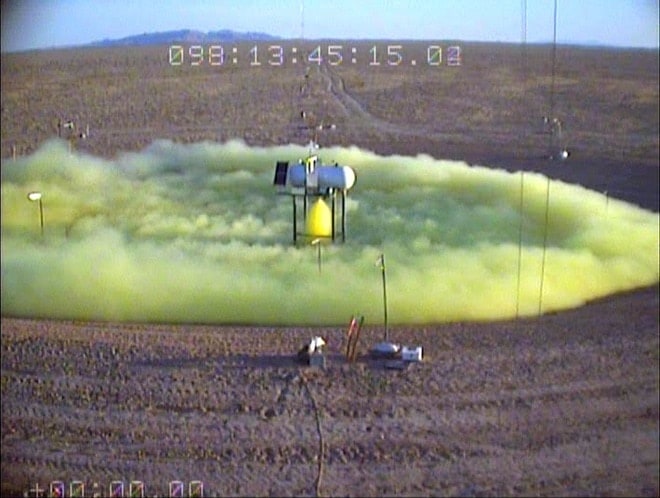 The scene 22 seconds into the original Jack Rabbit test at Dugway Proving Ground near Toole, Utah in 2010. (Photo: dugway.army.mil)

A test by the name of Jack Rabbit II will see tons of concentrated chlorine gas released in the desert of the U.S. Army’s Dugway Proving Ground in Utah.

This comes on the heels of the original Jack Rabbit test done at Dugway in 2010 in which chemical specialists safely released two tons of pressurized liquefied gas in a hole some 7.3 feet deep while observers remotely monitored the site.

As noted by the Salt Lake Tribune, the Utah Division of Air Quality has authorized initial testing with 10 tons of chlorine gas, upping the quantity to 90 tons per test depending on the outcome on Jack Rabbit II.

Today it is more commonly encountered in the manufacturing processes involved with making plastics, textiles, agrochemicals, pharmaceuticals, insecticides, dyestuffs, and in sanitation.

The tests are being conducted to better formulate a response to a hazardous materials spill such as a train car derailment.