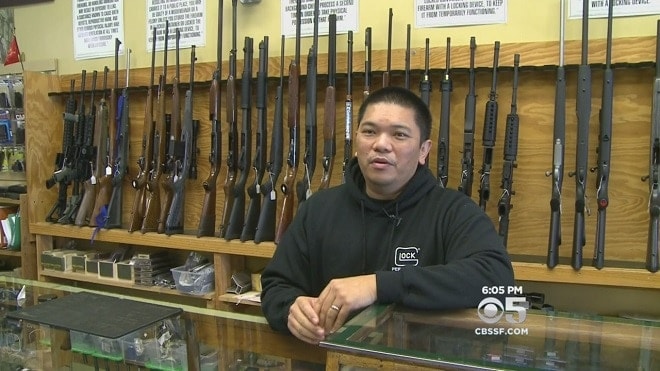 A proposed city ordinance to video all gun and ammo sales and transmit data to the San Francisco Police Department could mean the end for the last gun store in town.

In July, Supervisor Mark Farrell asked city attorney’s office to draft legislation increasing restrictions on gun stores operating in the city to mandate the recording of sales, storing the videos for at least five years, and transmitting data on buyer and firearms to police at least once a week.

With action expected on the proposal this month, the single gun shop in the city of some 830,000, High Bridge Arms, fears this could be the end.

Alcario pointed out that the store has 17 cameras already which provide a record of events, but he is wary of providing customer data on gun owners to police.

“What we don’t do is voluntarily give private information to the police department. Voluntarily, we just don’t do that. People are very private about their information,” he said.

Lawrence Keane, senior vice president and general counsel of the National Shooting Sports Foundation, explained to Guns.com that the campaign to pile on additional regulations on lawful firearms dealers is misguided.

“It’s a shame that city politicians will view this as a victory. It is not,” said Keane. “The closing of this store will not prevent one criminal from getting a gun. Jobs and tax revenue will be lost, and its residents not one iota safer.”

Farrell’s proposed gun legislation is expected to be introduced at the Board of Supervisors meeting in coming days.