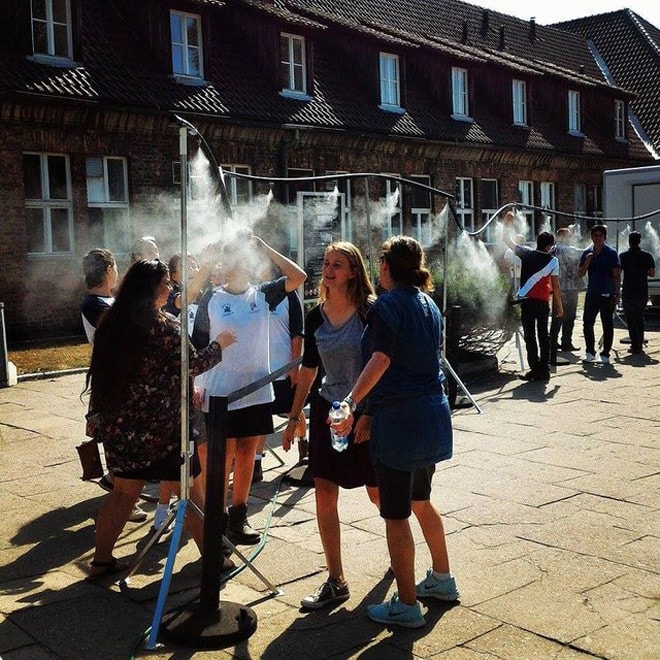 In an attempt to provide comfort for summer visitors at the Auschwitz Memorial, management had cooling showers – otherwise known as misters – installed near the entrance. But some claim the device is insensitive and offensive, given the location’s history, while the management says that was nowhere near their intentions.

“As a Jew who has lost so many relatives in the Holocaust, they looked like the showers that the Jews were forced to take before entering the gas chambers,” said Meir Bulka, adding that someone in his tour group called it a “Holocaust gimmick.”

Museum management responded to the accusations by posting an explanation on their Facebook page, the same explanation they offered Bulka when he confronted them during his visit.

Because of the extreme heat wave we have experienced in August in Poland, mist sprinklers which cool the air were placed near the entrance to the Museum. They are located in one place – near the area where a queue of people who collect the entry cards to the Memorial is formed. This is a place in the open sun and without any possibility of hiding in the shade where sometimes you need to stand for quite a long time since the Memorial is visited by thousands of people every day. The sprinklers are installed on the days of highest temperatures and removed when the temperature drops

Among visitors there are many people who come from countries where such high temperatures as we have this summer in Poland do not occur. Something had to be done, as we have noticed cases of faints among people and other dangerous situations. Therefore we had to do everything we could to minimise the risks connected with the heat and high temperatures. The safety and health of visitors are our priority during the period of extreme heat. Cooling air have been really helpful to visitors in this difficult situation.

The post also explained that the misters used for cooling do not resemble the fake showers, which were essentially gas chambers, used during the Holocaust.

Piotr Kadlcik, former president of the Union of Jewish Religious Communities in Poland, indicated that the outrage is an unnecessary stretch.

“The Germans twisted the concept of shower – a source of cleanness and relief – into the equivalent of pure horror. We shall not follow this path,” Kadlcik said. “The unprecedented heat wave during this summer required proper measures. It’s a sign of care for the visitors by museum staff.”

Responses to the Facebook post show an overwhelming amount of support for the management’s efforts in trying to help visitors at the historic site to be more comfortable.