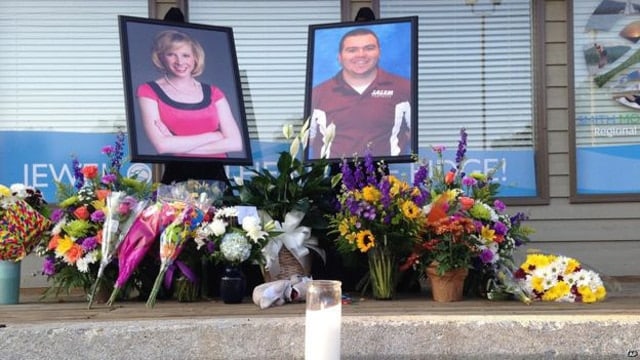 A memorial has popped up in front of the plaza where the shooting occurred. On the left is Alison Parker, 24, and Adam Ward, 27. (Photo: Associated Press)

In the wake of two journalists being gunned down on live television, the debate on gun control returned from a month-long slumber and participants followed their post-massacre playbook.

Gun control advocates called for tougher gun laws while pro-gun advocates did one of three things: nothing, dismiss calls for gun control, or counter by blaming another issue like mental illness.

But this time around conversations also included whether or not it’s appropriate to debate gun policy after a high profile shooting. Much like debate over gun control itself, reactions were split.

From the pro-gun side

Some pro-gunners say the topic is inappropriate to discuss and criticize anyone who does as exploiting tragedy. Within hours of the incident, on Aug. 26, two Virginia state lawmakers released statements condemning any talk about guns or gun control.

“During the hours and days to come, many comments will be made about this crime. Some will attempt to use this tragedy for politically motivated purposes. Such actions or discussions are inappropriate at this time,” said Delegate Charles Poindexter, of Virginia’s 9th District, in a statement.

Delegate Chris Head, of Virginia’s 17th District, echoed his cohort’s response. “I was asked by someone to comment on the 2nd Amendment in the wake of today’s events. (In my humble opinion), to politicize anything about this tragedy today or perhaps even this week is morally wrong. That time will come. Now is not that time,” he wrote on Facebook.

“Every shooting tragedy is exploited by gun control advocates as another case for increase(d) background checks. But they keep pushing this proposal even though it wouldn’t have stopped these cases,” Lott wrote.

The gunman responsible for killing two journalists and injuring a third person was able to pass a background check because there was nothing in his criminal history to suggest he was a prohibited person. The dealer then sold him a handgun that he would use a month later to commit his heinous act.

Lott argued that the only reason for expanding background checks is to make it more difficult for people to own firearms.

“The only thing that we know that these rules would do is raise the price (of) guns and reduce gun ownership,” he argued. “Reducing gun ownership will in turn make it harder for people to defend themselves and increase crime.”

Lott identified “they” as gun control supporters like presidential hopeful Hillary Clinton, Virginia Gov. Terry McAuliffe, the Obama Administration and the Brady Campaign, but described Andy Parker, father of one of the slain journalists who vowed to make gun control his life’s work, as being “drawn into the gun control debate” by the media.

Colion Noir, an unofficial spokesman for the National Rifle Association, presented a similar argument in a video posted to his personal YouTube account. He dismissed calls to expand background checks as well, but he also told the victims’ family members, like Parker, to not let emotions get the best of them.

“To the parents of Alison Parker and Adam Ward, I have no right to tell any parent how to grieve over the loss of their child. Grief-inspired advocacy can be extremely effective and powerful. And I say run full speed to try to find a way to end violence like this,” Noir said. “However, sometimes in a fight we can become so emotional, everyone and thing starts looking like the enemy. Even if they’re there to help us.”

The NRA did not respond to requests for comment on the matter.

From the gun control side

On the other hand, gun control advocates would wholeheartedly disagree with criticisms that discussing gun policy in the wake of a tragedy exploits the victims.

“This is exactly the time that we should be talking about how to prevent the gun violence tragedies that kill 88 Americans and injure hundreds more every single day in our country,” said Jennifer Herrera, head of the Virginia chapter of Moms Demand Action, in a statement.

“This is an absolute crisis and it is no time for empty platitudes,” she added about those who offered condolences to families while dismissing debate on relevant policy issues.

In response to claims that discussing gun control after an incident exploits the tragedy, Ladd Everitt, communications director for the Coalition to Stop Gun Violence, told Guns.com the only people offended come from the pro-gun side.

“I have never in 15 years received an email, a phone call or any type of correspondence from a victim of gun violence telling me ‘how dare you talk about gun violence today.’ Never. The only people I have ever seen complain about it are people who support loosening gun laws,”Everitt said. “In many cases the survivors themselves are not shy about addressing the issue. Andy Parker being a recent obvious example.”

He used identical statistics as Herrera, that 88 Americans are killed every day in America for a total of 33,000 a year. “Are we gonna take off everyday? Theoretically we could pay respects to those 88 people every day and never talk about the issue — it’s ridiculous,” he said.

“I don’t care what the issue is — it could be airline safety or controlling the spread of a certain disease or whatever it is — I don’t think we do any issue justice by not discussing it, not having a vigorous discussion about it when a crisis occurs related to it,” he said. “I can’t think of a more appropriate time to have that discussion and I have never found … talk about gun policy to be offensive to people who have been impacted by gun violence.”