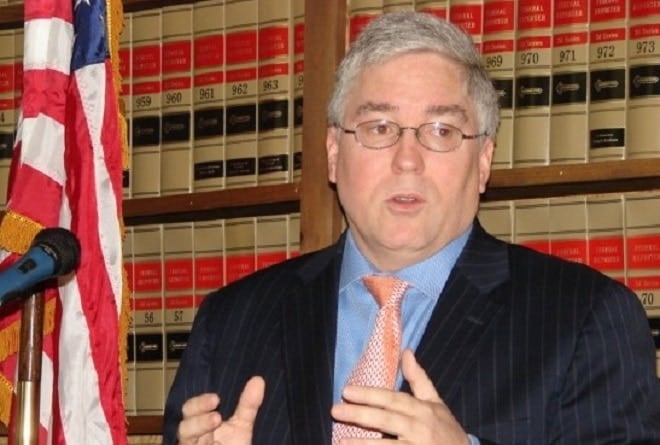 WV Attorney General Patrick Morrisey is leading the charge by 23 other attorneys general, along with gun rights groups, to have the Supreme Court ponder local assault weapon bans. (Photo: wvmetronews.com)

Just shy of half the attorneys general across the country signed on to support a challenge to an Illinois city’s arbitrary ban on certain guns.

The states, in an amicus brief led by West Virginia Attorney General Patrick Morrisey, questions whether a municipal ban on possession of some of the weapons most commonly used for lawful purposes violates the Second Amendment.

The vehicle for the challenge involves the case of gun owner Arie Friedman filed against the Chicago suburb of Highland Park.

Backed by Illinois State Rifle Association and a number of firearms manufacturers and trade groups, Friedman sought to take the city to task for its 2013 ban on what it defines to be assault rifles to include common AR-15s, and magazines that hold more than 10 cartridges.

Friedman lost his claim to own now-prohibited guns and magazines in violation of the city’s ordinance to a lower court and appealed to the U.S. Seventh Circuit Court of Appeals last year.

In April, that three-judge panel, staffed by a trio of appointments by President Ronald Reagan, sided with the city and supporting gun control groups such as the Brady Center to Prevent Gun Violence in upholding the previous ruling by a 2-1 vote.

In that ruling, Circuit Judge Frank H. Easterbrook wrote for the majority that assault weapon bans such as the one challenged are valid as long as they “make the public feel safer.”

The AGs argue that the circuit court has gone too far and that they expressly refused to submit to the landmark Heller precedent citing the Constitution grants an individual right to self-defense that extends to weapons in common use, and as such, “[S]hould grant certiorari, reverse the Seventh Circuit, and send a clear message to lower federal courts that the principles in Heller must be faithfully applied.”

The National Rifle Association agrees and last week filed their own brief in addition to the one from the 24 AGs. Second Amendment scholars are also following the outcome of the challenge closely.

“This is a very important case,” UCLA constitutional law Professor Adam Winkler told Guns.com Thursday. “The Supreme Court has left open so many questions about the scope of the Second Amendment, including what types of weapons should be considered in ‘common use.’ Does that mean that the guns are commonplace or that they are commonly used for core Second Amendment purposes, like self-defense?”

Winker contends that should the high court agree to hear arguments, a decision could be far reaching in today’s digital age. “How the Court rules here – if the Court takes the case – will impact laws regulating magazine bans, 3-D-printed guns, and other efforts to single out certain firearms for bans,” he said.

However, Winkler warns that there is a lot at stake should the justices, in the end, agree with the lower courts.

“This appeal is high-risk for gun enthusiasts. The Court may well say, like so many of the other federal and state courts that have addressed restrictions on military-style firearms, that these bans are constitutionally permissible. That would encourage other states to ban these firearms and possibly lead to a new round of gun control laws,” Winkler said.

Attorneys for Highland Park will now have an opportunity to respond, and then the Supreme Court will consider whether it will hear the case.