Everytown to host ‘whatever it takes’ rally in Capitol 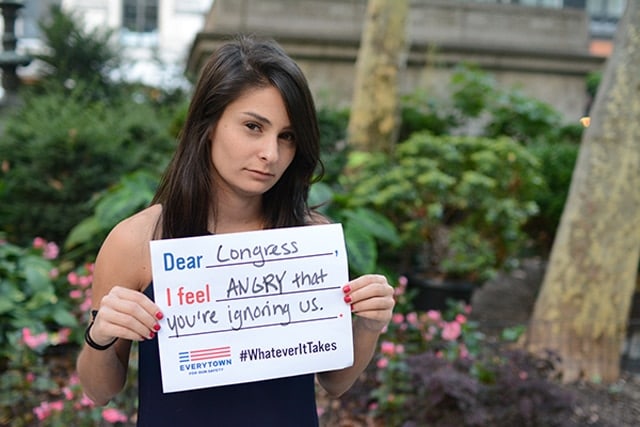 A woman telling Congress that she feels “angry that you’re ignoring us.” (Photo: Everytown)

Andy Parker said he’d do “whatever it takes” to prevent incidents like the shooting death of his daughter and her coworker on live TV and with the help of a gun control group, his words have been turned into a national campaign.

Everytown for Gun Safety announced a rally for #WhateverItTakes day on Capitol Hill to urge Congress to pass legislation that could prevent future tragedies. The is also urging others to rally with them in their own communities on Sept. 10.

Parker’s daughter, Alison Parker, was killed alongside her coworker, Adam Ward, when a disgruntled ex-employee of the TV station they worked for shot at them during an on-air interview at a shopping center outside Roanoke, Virginia. The woman being interview was also injured during the incident.

“I plan to devote all of my strength and resources to seeing that some good comes from this evil. I am entering this arena with open eyes. I realize the magnitude of the force that opposes sensible and reasonable safeguards on the purchase of devices that have a single purpose: to kill,” Parker wrote in an opinion piece published by The Washington Post.

“That means we must focus our attention on the legislators who are responsible for America’s criminally weak gun laws; laws that facilitate the access dangerous individuals have to firearms on a daily basis,” he added.

At the rally, Parker will be joined by other Everytown spokesmen like Richard Martinez who lost his son in a similar fashion last year during a rampage outside of Santa Barbara; Erica Lafferty whose mother was killed when she tried to stop the gunman at Sandy Hook Elementary; Lucy McBath whose son was shot and killed over a dispute over loud music at a Florida gas station in 2012; and Shannon Watts, the founder of gun control Moms Demand Action.

In addition to organizing a rally, Everytown launched the #WhateverItTakes campaign on social media in which participants photograph a picture of themselves holding a card to tell lawmakers how he or she feels about gun violence in America.