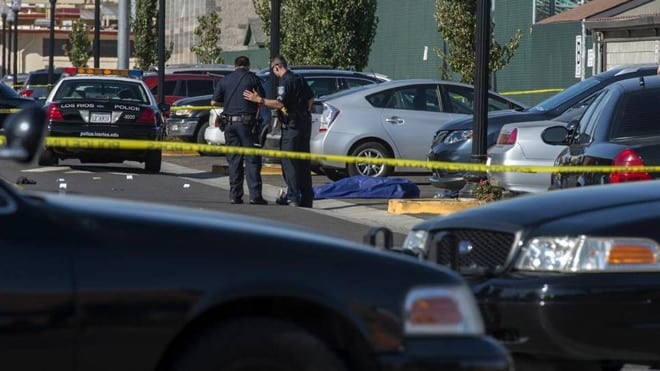 Authorities combed the area for several hours searching for the suspect, but as of Thursday night he was still at large. (Photo: The Sacramento Bee)

Students at the Sacramento City College were placed on lockdown before being sent home Thursday afternoon after a suspect opened fire on the busy campus, injuring three people, one fatally.

The shooting occurred just before 4 p.m. after some sort of altercation in a faculty parking lot near the college’s softball field. The incident involved a single suspect, who fled before authorities arrived, and police believe it was an isolated incident and not a random shooting spree, according to reports from the Sacramento Bee.

Witnesses saw the man run away moments after hearing gunshots and, according to the Sacramento Police Department, described him as being a “male Tongan” wearing beige cargo shorts. He may or may not have been wearing a white t-shirt, as some reports indicate he was shirtless.

As reports of the shooting flooded in, the college was placed on a campus-wide lockdown and students were updated on the situation via text message until 4:41 p.m. The system left some students, who described the evacuation as chaotic, feeling frustrated for what they believed was a lack of proper communication. Students were eventually sent home and classes were canceled for the remainder of the day, but are set for regular schedule Friday.

Responding officers cleared the campus room by room and a police helicopter searched the area from overhead as officers combed the surrounding areas. As of Thursday night, the suspect was still at large.

None of the victims have been identified at this point, but all were confirmed to be students at the college. It is unknown at this time if the shooter had ties to the school.

One victim was pronounced dead at the scene, the second was seriously injured and rushed to a local hospital for medical treatment, while the third victim received minor injuries when he was grazed by a bullet.

Authorities have not released a motive for the shooting.