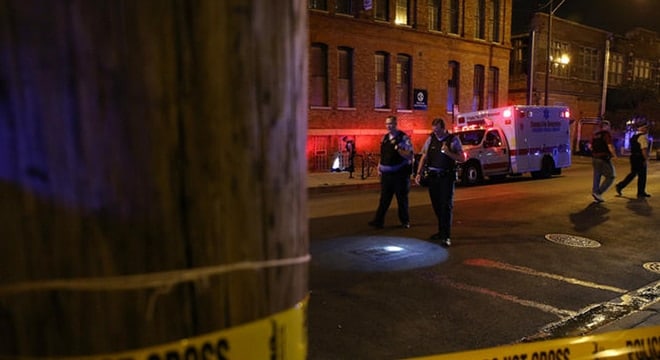 Violence soared in Chicago over Labor Day weekend with 37 people shot, at least six fatally, while several others remain in critical condition. Among the victims were numerous teens, and several of the shootings are believed to have been gang-related.

The Chicago Tribune reported the weekend’s violence brought the number of shootings in the city this year to nearly 1,700, an increase of more than 17 percent in one year. The homicide rate has currently skyrocketed to over 300, an increase of nearly a quarter over the last year, with more murders occurring on Sunday than any other day of the week and August thus far being the bloodiest month of the year.

But even with an increase in shootings across the board, the Labor Day weekend statistics nearly mirror those of last year, in which the city saw 36 wounded and four killed. Contrarily, the weekend proved to not be as deadly as this year’s Independence Day weekend, which ended with 55 wounded and 10 dead.

Nonetheless, the root – and solution – to Chicago’s violence is a highly-debated topic, but most authorities agree that the violence stems primarily from gangs and is fueled by the lack of ramifications criminals face for their actions.

“We have a very big gang problem in the city of Chicago, and at the same time we have too many people carrying illegal guns without many consequences,” Robert Tracy, chief of crime control strategies for the Chicago Police Department, said Sunday, echoing the words of Chicago Police Superintendent Garry McCarthy.

“Across the country, we’ve all found it’s not the individual who never committed a crime before suddenly killing somebody. It’s the repeat offenders. It’s the same people over and over again,” McCarthy said last week, after five people were shot to death in the city in just under 10 hours.

However, the violence is far from limited to just Chicago. The New York Times reported homicide rates have skyrocketed this year in more than 30 cities across the country, including Milwaukee, New Orleans, Baltimore, Washington and St. Louis, which has seen a shocking 60 percent increase in murders this year.