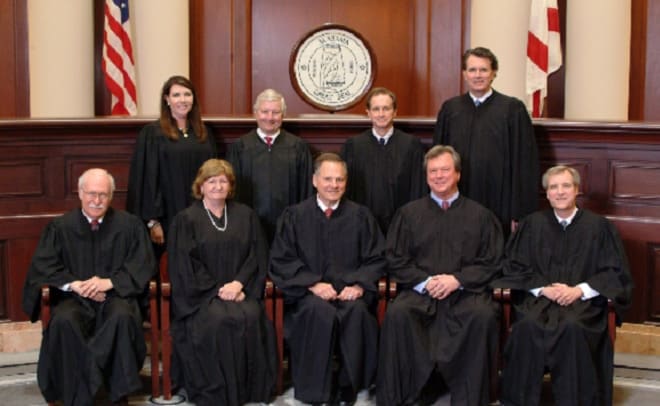 The justices of the Alabama Supreme Court found that two lower courts were in error in the case of a man who was open carrying in 2011. (Photo: alabama.gov)

The Alabama Supreme Court last week found a law banning the open carry of a gun onto someone else’s property is unconstitutional.

In a 5-3 decision tendered Friday by the state’s highest court, the majority overturned the conviction by lower courts of Jason Dean Tulley, arrested in 2011 for carrying a pistol on premises not his own after he visited the First Educators Credit Union while open carrying.

Although he removed the gun from the property when told it was not allowed, he was charged with a crime days later.

At first he was found guilty by the Jacksonville Municipal Court and ordered to pay $250 in fines and court costs for violation of state law, but he appealed to the Calhoun Circuit Court, which upheld the decision. The circuit court added a suspended 30-day jail term and six months probation to Tulley, who then pursued his appeal to the Alabama Supreme Court.

The high court agreed, noting specifically the municipal court charging Tulley with the original offense “is unconstitutional on its face in that it cannot be enforced under any circumstances,” in the 35-page decision published Sept. 4.

In reversing the previous judgement on Tulley, the court found the city’s case nonexistent, as state law did not mention criminal penalties.

“[T]he offense of carrying a pistol ‘about his person on premises not his own or under his control’ within the City’s corporate limits did not exist,” the ruling states.

Associate Justice Lyn Stuart, writing in her dissent from the majority, contended the city was within the law, while Justice Greg Shaw argued Tulley had both sufficient notice of the gun free zone and of its penalties.

“This is definitely a victory for gun rights advocates,” said J.D. Lloyd, one of Tulley’s lawyers. “More importantly, it’s a victory for folks who believe in Due Process and don’t want to see the Legislature passing vague criminal statutes.”