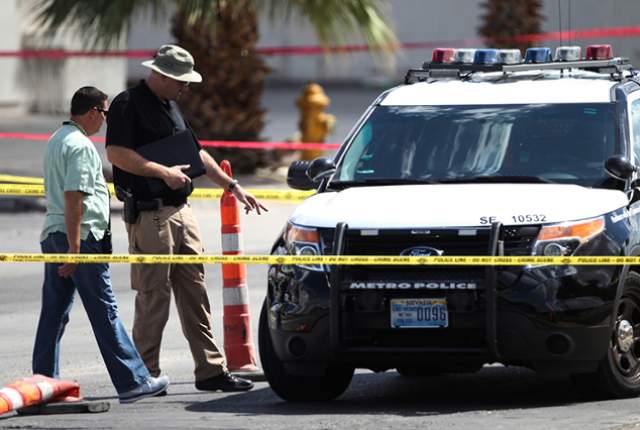 Investigators were busy Tuesday gathering evidence to mount a case against a man who opened fire in an ambush style attack on two uniformed Las Vegas officers Sunday afternoon.

The officers were sitting in a marked patrol car stopped at a traffic light at the intersection of Nellis and Tropicana boulevards when a man walked up to the vehicle and opened fire, striking one officer in the hand, the Las Vegas Police Department said. On their way to a disturbance call at the 99 Cent Store, the officers were on Nellis, waiting to turn westbound onto Tropicana.

After both men exited the vehicle the uninjured officer chased the suspect on foot, capturing him in the parking lot of a 7-Eleven a short distance from the initial scene without firing any shots. Neither officer fired their pistols, authorities said.

The injured officer was transported with non-life threatening injuries to University Medical Center some five miles away.

No information on the type of firearm used by the suspect has been released, other than it was a semi-automatic handgun.

The Las Vegas Police Department said Tuesday it would not release any additional information ahead of its press conference tentatively scheduled for Wednesday.

Because the investigation is ongoing and in its early stages, police don’t want to compromise the case before handing it over to the prosecutor’s office, Jesse Roybal, public information officer and 14-year veteran of the Las Vegas Police Department, told Guns.com.

The attack came about a week after a Houston sheriff’s deputy was gunned down by a suspect who shot him 15 times in an apparent ambush and the same week a Fox Lake, Illinois, police officer was killed in a similar attack.

Last year, two Las Vegas police officers were also killed in an ambush resulting in the man and woman attackers killing a third person before taking their own lives.

In the first seven months of 2015, a total of three officers have been killed in ambush attacks, down from 15 last year and 5 in 2013, according to data from the National Law Enforcement Officers Memorial Fund.