Home invader survives gunshot to the head, runs from police 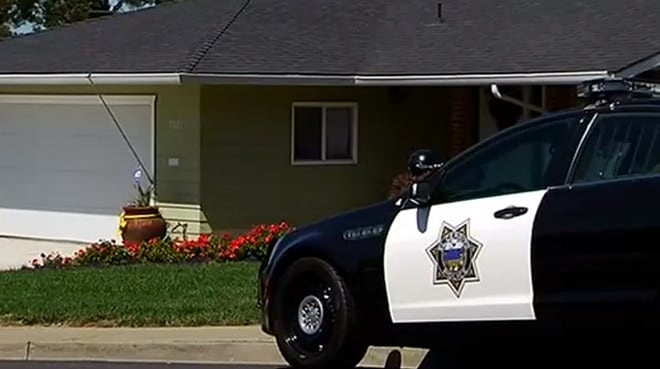 The homeowner ended up with a police officer sitting outside of his home after a family member of the suspect confronted the 85-year-old man about the shooting. (Photo: KTVU)

An Oakland man suffered a gunshot to his head as he attempted to break into a El Cerrito home Wednesday, but that didn’t stop him from trying to run away from police.

The incident occurred when the suspect, 34-year-old Shawn Mulberry, and an accomplice knocked on the front door around 11:15 am, according to local reports. When the homeowner, who neighbors would only identify as “Harry,” failed to answer, Mulberry and his cohort ventured into the backyard. Thinking the men were suspicious, Harry called the police.

As Harry waited for police, Mulberry and the other suspect started to kick-in the back door, so Harry grabbed his gun. When the men entered, he opened fire. Mulberry took off on foot and the other in a vehicle parked nearby.

Police arrived a short time later and found Mulberry about 15 blocks from the house. When officers attempted to approach Mulberry, he allegedly led them on a foot pursuit, but authorities caught him a short time later. It was then that officers discovered Mulberry had been shot in the head.

“It is kind of amazing to think that a person with a bullet in their head was able to travel that distance and run from police once they saw him,” said Lt. Steve Bonini with the El Cerrito Police Department.

Mulberry was transported to the hospital where he was initially listed in critical condition, but has since been upgraded to stable. Mulberry, who was on parole and had a warrant for his arrest at the time of the break-in, now faces burglary charges.

Authorities have not found the second suspect, who is believed to have fled in a white or gray sedan.

After the break-in and subsequent shooting, one of Mulberry’s family members went to Harry’s home to confront him about the shooting – a move which both authorities and neighbors feel was not acceptable.

“It’s an intimidation of a witness,” said neighbor Neil Swendsen. “That’s all it is, pure and simple.”

Although authorities did not elaborate on the confrontation, the visit prompted the police department to station an officer at Harry’s home. Meanwhile, the homeowner’s neighbors all think Harry acted appropriately.

“When an 85-year-old man can take on a young thug breaking into his house, then I would absolutely call him a hero,” Swendsen said.

The neighbors, who are now calling him “Dirty Harry,” want to gather donations to buy Harry a bigger gun because “obviously the gun he had didn’t do the job,” Swendsen said.