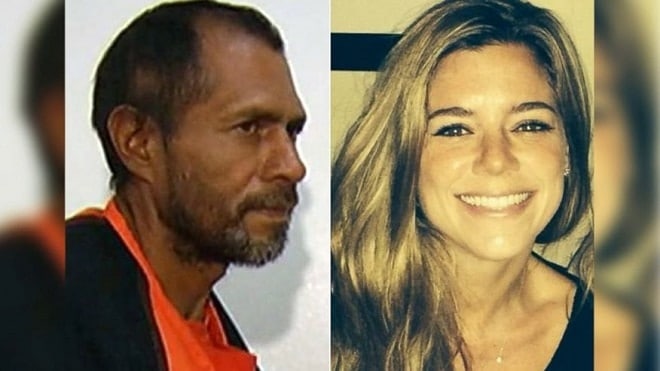 Juan Francisco Lopez-Sanchez has been held over to stand trial in the death of Kathryn Steinle, 32, after allegedly firing three rounds in a July indecent that left the woman dead. (Photos: AP composite)

Attorneys for an undocumented immigrant facing charges in the high-profile death of a woman on San Francisco’s Pier 14 contend it may be the gun’s fault.

Juan Francisco Lopez-Sanchez, 45, a Mexican national with at least five deportations under his belt, contends he shot Kathryn Steinle by accident with a found gun now tied to the U.S. Bureau of Land Management. California Superior Court Judge Brendan P. Conroy on Friday found there is enough evidence for Lopez-Sanchez to stand trial on charges of second-degree murder for his alleged involvement in the woman’s death.

However, his legal team contends that the man never pulled the trigger and claimed the type of handgun involved is documented for having accidental discharges.

“This gun has no safety,” said public defender Matt Gonzalez as reported by the Associated Press.  “There is no evidence that he put his finger in the trigger.”

Steinle was killed with a single shot from the three rounds believed fired on July 1. Lopez-Sanchez, arrested an hour after the shooting and on probation from felony charges in Texas, was originally charged with first-degree murder and a firearm enhancement five days later.

Lopez-Sanchez has in the past admitted to shooting Steinle in a prison interview but maintains he found the gun wrapped in a shirt on a bench near the pier.

The firearm involved in the shooting, described by the San Francisco Chronicle as a .40 caliber Glock, was confirmed stolen from a BLM ranger’s car while the agent was in the city on business just four days prior to Steinle’s death. While the gun was reported stolen to authorities, local law enforcement did not collect forensic evidence from the crime scene.

Contrary to Gonzalez’s argument, Glock states on its website their guns have three passive, independently operating, mechanical safeties that only deactivate “when the trigger is pulled and automatically reengage when the trigger is released…”

Kathryn Steinle’s family are currently perusing claims for damages from the BLM, San Francisco Sheriff’s Department and U.S. Department of Homeland Security, claiming the ranger’s weapon was left loaded and in plain view in his car.

“The weapon was not a Glock, despite being incorrectly reported as such in the old Chronicle article.  It was a Sig Sauer p239 and had no safety.”