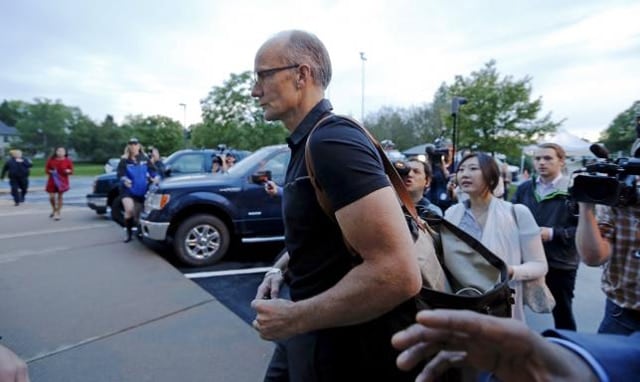 Walter Palmer, the Minnesota dentist who killed the famed lion, Cecil, during a big-game hunt in Zimbabwe in July, sat down with reporters with The Star Tribune and the Associated Press for his first interview since his hunt became infamous.

Sitting with his publicist and an attorney, Palmer discussed the incident, the impact the backlash has had on his life and his plans to try to return to normalcy.

Palmer, 55, told the reporters that he’s been out of the public eye but not in hiding like some media outlets reported.

“I’ve been among people, family and friends. The location is really not that important and I really wouldn’t say. But I haven’t been in hiding,” he said.

He said the backlash has been hard on his wife and daughter. “They’ve been threatened. In the media, as well, and the social media, and … I don’t understand that level of humanity, to come after people not involved at all.”

He would not talk about the incident other than to clarify that the lion was wounded with an arrow, found a day later and then killed with an arrow outside park boundaries. He said it was not left to suffer for 40 hours or shot with a gun like some reports claimed.

Also, Palmer said the $50,000 price tag of the hunt was inaccurate, but would not say whether the cost was more or less.

And Palmer’s unofficial attorney, Joe Friedberg, said although the lion was collared, which Palmer did not know, “it’s perfectly legal to shoot a collared lion.”

However, Palmer explained, “Obviously, if I’d have known this lion had a name and was that important to the country, or a study, obviously, I wouldn’t have taken it.”

Palmer returned to the River Bluff Dental office in Bloomington, Minnesota, on Tuesday morning and was greeted by photographers and some protestors, according to reports. The office had been closed since Palmer became the subject of an Internet shaming campaign that called for the end of trophy hunting.