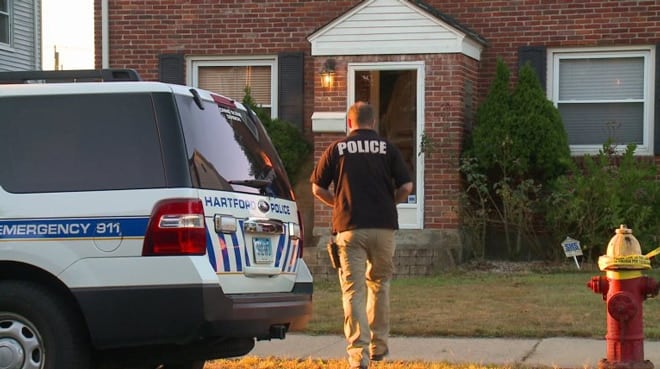 The homeowner was not acquainted with the suspects, but owns his own business and believes he may have been targeted because he often leaves the business with large amounts of cash. (Photo: Fox)

A family is safe and two suspects are in critical condition after they were shot during a home invasion in Hartford, Connecticut, late Saturday night.

According to a local Fox affiliate, the homeowner, whose name has not been made public, returned home from work around 11 p.m. and was approached by two armed men as he walked toward his house. One of the suspects pointed a gun to the man’s head and forced him inside where a physical altercation ensued.

However, the homeowner was also armed with a legally-owned handgun and once he had the opportunity, grabbed it and fired at the two suspects. Both suspects were struck multiple times – one in the head, groin and leg, and the other in the arm and chest. The more severely injured suspect fell to the floor and did not move, while his accomplice took off, leaving him behind, but showed up at an area hospital about half an hour later. Meanwhile, the homeowner called the police to report what had happened.

When officers arrived a short time later, the suspect, who was still lying on the floor, was transported to the hospital. Both suspects underwent surgery and were last listed in critical but stable condition, the Hartford Courant reported. Authorities also found the suspects to be in possession of a firearm and zip ties.

The names of the suspects have not been released, pending approval of arrest warrants, but Deputy Chief Brian Foley, confirmed both men are from Lawrence, Massachusetts, which is located over 100 miles away from the scene of the home invasion. Additionally, Sgt. Reginald Early said the investigation is ongoing and authorities believe there may have been other suspects involved.

The homeowner only suffered minor injuries during the scuffle and is expected to recover. A woman and child who were also home during the home invasion were unharmed.

The home was also equipped with a video surveillance system, which may have captured a portion of the crime.