Authorities in Australia are beside themselves after being called in to pick up a collection left behind by a deceased man that included an SKS and a 10/22.

Nearly twenty years past the epic gun ban imposed after the Port Arthur massacre of 1996, which led to nearly 700,000 firearms bought back from the public and destroyed, police in one small town almost fell off their rocker when they were dispatched to impound a massive 20-gun collection.

Left behind by an 88-year-old man upon his death, police in Dapto, New South Wales moved in with a shopping cart equipped with pink pool noodles to pick up what would be termed in the U.S. a modest collection. 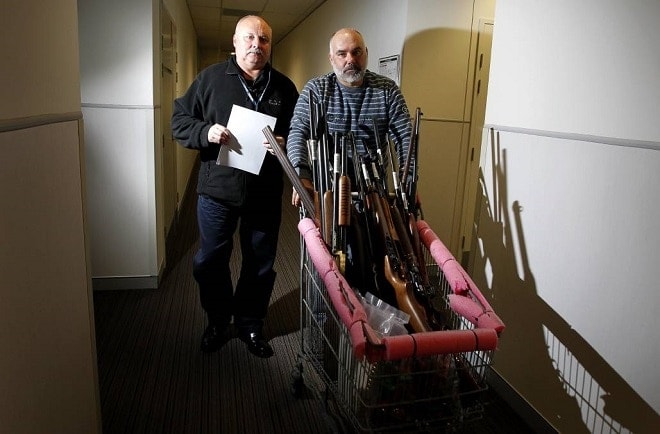 According to images from the scene, most of the firearms are bolt-action target and hunting rifles as well as a smattering of shotguns. There are four two semi-autos including what appears to be a Chinese SKS with its distinctive orange stock, a Ruger 10/22 and an M1 Carbine– the possession of which was banned in 1996.

Police state that when the man, a hunter, was found to be the victim of undisclosed mental illness a few years ago, his six registered guns were confiscated by police. The 20 found after his death by his survivors were unregistered– a crime that can bring up to 14 years in prison for each gun.

“I’ve been doing licensing for 14 years. I’ve never ever seen 20 [never-registered] firearms…come out of a residential premises,” said Keevers. “His [motives] are going to remain a mystery because he’s passed away.”

The news shouldn’t have come as such as shock to the system.

As News 9 in Australia detailed, despite the vaunted meltdown in 1996, levels of gun ownership have surged once again to pre-Port Arthur levels. The report even noted that one firearms license-holder has legally acquired 329 guns and another in Victoria has been “granted permission” to have 131 firearms.

And that’s just the ones they know about.