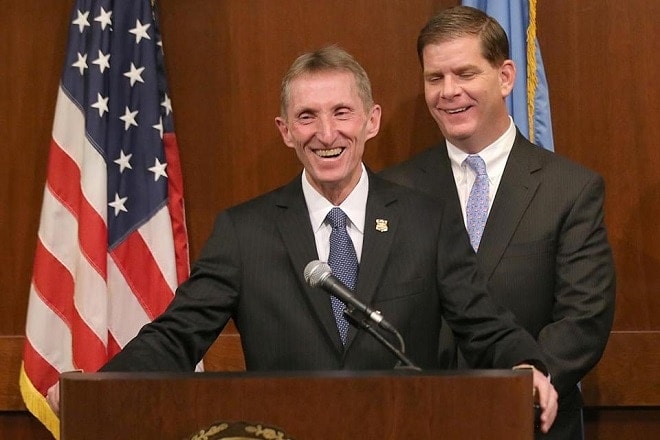 In an effort to reduce violence, officials in Boston are sending out letters to registered gun owners as part of the “Your Piece for Peace” initiative.

The outreach campaign, announced Wednesday by Mayor Martin J. Walsh and Boston Police Commissioner William Evans, contends most illegal guns taken off the streets in the city were recovered from someone other than the original, legal purchaser.

Walsh cited a study by Rutgers University and Harvard Kennedy School researchers, commissioned by the city, which found almost two thirds of the 3,202 recovered guns analyzed were not reported as transferred with the Massachusetts Firearms Records Bureau despite being required by law.

“These individuals who are doing the shootings, they have access to illegal weapons on the street,” said Evans in a statement. “Without better enforcement and education, we’re letting things slip through the cracks and legally purchased firearms are falling into the hands of criminals.”

Therefore, Boston Police are sending all 8,000 registered gun owners in the city an official letter reminding them of their duties under state law to report lost or stolen guns, as well as any sell or transfer in a timely manner.

Penalties for noncompliance include a $1,000 fine.

“As partners in keeping the neighborhoods safe we want to bring to your attention your obligations as a gun owner, and ask for your cooperation in keeping guns in the hands of only those legally authorized to carry them,” reads the letter.

The correspondence goes on to give tips about safe weapon storage, offers a free gun lock and closes with how to turn in unwanted firearms as part of the “Your Piece for Peace” program which offers a $200 gift card in return for a gun surrendered to police.

The program, debuted last year, has thus far brought in one, single firearm.

“We must think creatively in order to reduce the amount of illegal guns and violence on our streets,” said Mayor Walsh.