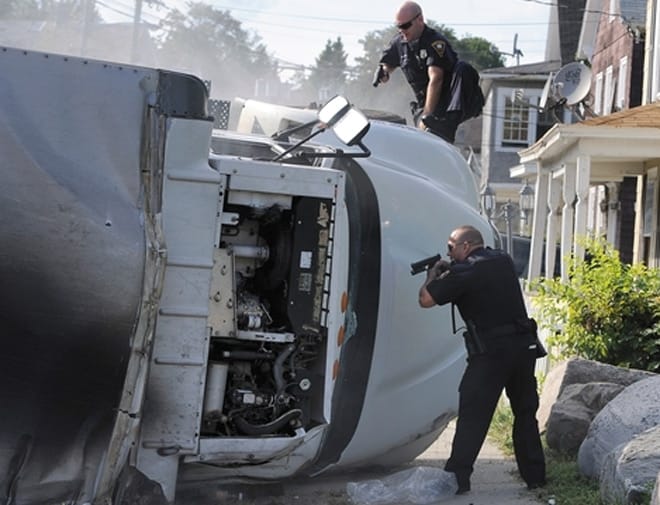 A man who is now paralyzed after he was shot by a police officer in 2011 while stealing an ice truck will receive $2 million from the city of New London, Connecticut, to compensate for the injuries he sustained. The civil suit filed against the city and the officer who shot him was dismissed Wednesday, local media reported.

Curtis Cunningham, who was later found to be high on PCP at the time of the incident, stole an ice truck on Aug. 24, 2011, and while engaged in a pursuit through the city with the police, wrecked, causing the vehicle to overturn. New London Police Officer Thomas Northup confronted Cunningham, who was standing inside the overturned truck. Northup instructed him to raise his hands, but Cunningham refused. But when the officer noticed what appeared to be an imprint of a gun at Cunningham’s waist and after he repeatedly ignored the officers commands to raise his hands, Northup shot Cunningham multiple times.

Authorities found that Cunningham, who was shot a total of four times, was in fact unarmed, but one of the bullets became lodged in his spine, causing permanent paralysis and thereby confining him to a wheelchair.

Northup was fired following an internal investigation that determined his use of force against Cunningham was excessive and violated department policies, despite the state attorney’s decision that Cunningham was not guilty of any wrongdoing and a prosecution was not in order. Northup was eventually rehired.

Nonetheless, Cunningham’s lawyer, Joel Faxon, said his client is ready to move forward with his life. “He’s disabled but hopeful to make the most of what he has to build a business,” Faxon said.

As the case came close to trial, Cunningham agreed to the $2 million settlement, which came as a unanimous decision by the city council. New London Risk Manager Paul Gills believed this was the city’s biggest pending case.