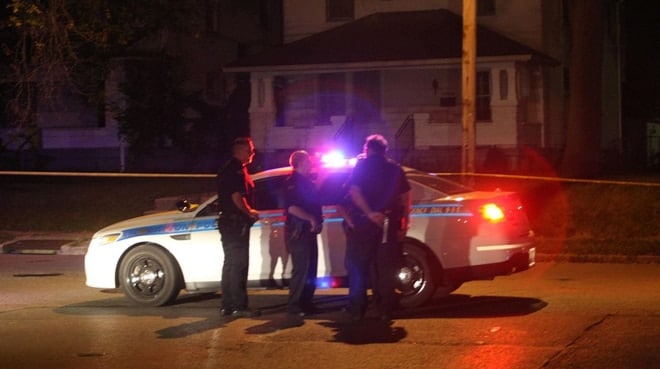 When officers arrived on the scene, they found DeBrandon Jurrod Dickerson, 22, lying on the ground, deceased from a gunshot wound to the chest. (Photo: Dayton Daily News)

A 22-year-old man from Detroit is dead after he broke into a Dayton, Ohio, home just after 3 a.m. Wednesday and came face to face with the homeowner who was armed with a gun.

The 46-year-old woman, who did not wish to be identified, called 911 after she heard someone outside then glass from one of her windows shatter, but the intruder, who was later identified as DeBrandon Jurrod Dickerson, could not get into the house from that window because the homeowner had metal security bars installed just last month after another break-in, Dayton Daily News reported.

Dickerson was persistent and climbed up a pillar at the front of the home and broke a second-floor window that did not have metal bars. The homeowner heard the man coming through the second window and hid in a bathroom. But when Dickerson approached the woman inside her home, she shot him in the chest.

The suspect then fled from the home, leaving the same way he entered before jumping off of the roof and running down the street. Dickerson, who was later determined to be staying with his cousin just a few blocks over, left a trail of blood behind him, according to a report from WHIO. He was found lying on the ground a short distance from the home and was pronounced dead at the scene.

There is reason to believe that Dickerson may not have acted alone, authorities confirmed, and also stated that, although the incident is still under investigation, initial evidence shows the homeowner acted in self-defense.

The homeowner said she has seen too many break-ins at her home. In fact, there was another one just last month and that is what prompted her to get the security bars. Altogether, she has been targeted five times in the last 11 years. And this was not the first time she has shot an intruder either. In June of 2013, she shot a teen who kicked in her back door. The teen later showed up at an area hospital and he and an accomplice were promptly put in police custody.