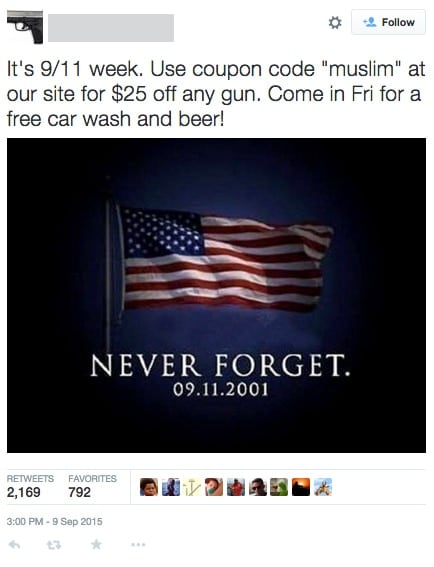 The controversial Florida gun store that made headlines for declaring itself a “Muslim-free” zone launched a promotion coupon code “Muslim” for a discount during “9/11 week.”

The store, owned by self-described “marketing genius” Andrew Hallinan, has been busy promoting and defending the promotion on social media throughout the day.

Whether or not this is just another move to fan the flames is up for debate. Last month, Hallinan teamed up with the infamous George Zimmerman to sell Confederate flag paintings in order to raise funds for Hallinan’s legal dispute with an Islamic group.

The Council on American-Islamic Relations filed suit against Hallinan’s store for discrimination after he declared the shop a Muslim-free zone in an online video, which he posted following July’s shooting death of five servicemen by a self-radicalized Islamic extremist.

The group made efforts to settle the dispute, but Hallinan publicly rejected the offer due to allegations that CAIR was a terrorist organization.

Although there have been a handful of high profile shootings this summer, the Chattanooga shooting is the only one that evoked such a dramatic response from the Hallinan.