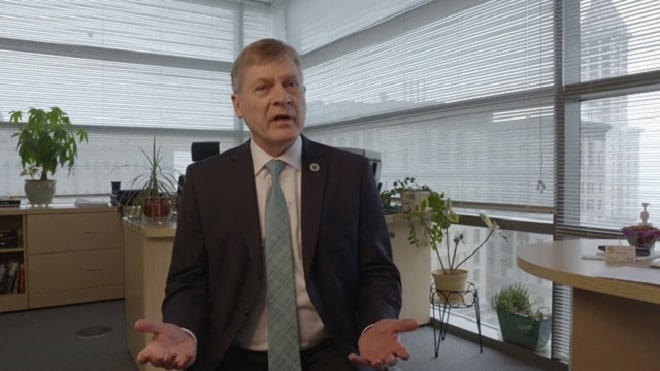 Seattle City Attorney Pete Holmes is getting some pro-bono assistance from a huge international law firm in the city’s fight against gun rights advocates. (Photo: KCTS)

With the city facing a triple threat challenge from some of strongest Second Amendment groups in the nation, Seattle is adding to its legal team.

Last month Seattle Mayor Ed Murray, himself a member of Michael Bloomberg’s Mayors Against Illegal Guns organization, signed a contentious measure to put a $25 tax on each firearm and up to 5 cents on each round of ammo sold in the city.

This in turn triggered a promised lawsuit by the National Rifle Association, National Shooting Sports Foundation and Second Amendment Foundation who joined forces in an unprecedented effort to take the city to court over the tax they contend is illegal.

“This is where Seattle draws the line,” City Attorney Pete Holmes, a founding member of Prosecutors Against Gun Violence, said in a statement. “The NRA doesn’t get to come into our City and tell our elected officials that they lack the authority in Washington state to tax businesses that sell a product that, when misused, so dearly costs our constituents, most of them young people.”

Steptoe, as noted on the firm’s website, has more than 500 attorneys from Beijing to Brussels.

The team coming to Seattle is led by William F. Abrams, head of the firm’s Palo Alto, California office, is a consulting professor at Stanford University and has in the past served on the Steering Committee of the American Bar Association Death Penalty Representation Project. Joining Abrams from Steptoe are Laurie Edelstein, Sarah Jackel and David Kwasniewski.

“Gun-fueled tragedies like Sandy Hook, where 20 children and six school staff were slaughtered, ironically result in a stampede to buy even more weapons,” Holmes said. “It’s a pattern seen over and over again, apparently out of the misplaced fear that government would step in to curtail gun sales.”

Gun rights advocates contend Seattle’s quick agreement to bring in outside counsel says a lot about their faith in Holmes.

“It looks like Seattle does not have confidence in their own city attorney. That is why they are bringing in four attorneys from California,” SAF founder Alan Gottlieb told Guns.com Friday. “I am confident that we will win this case and Seattle will lose just like the last time we sued them.”