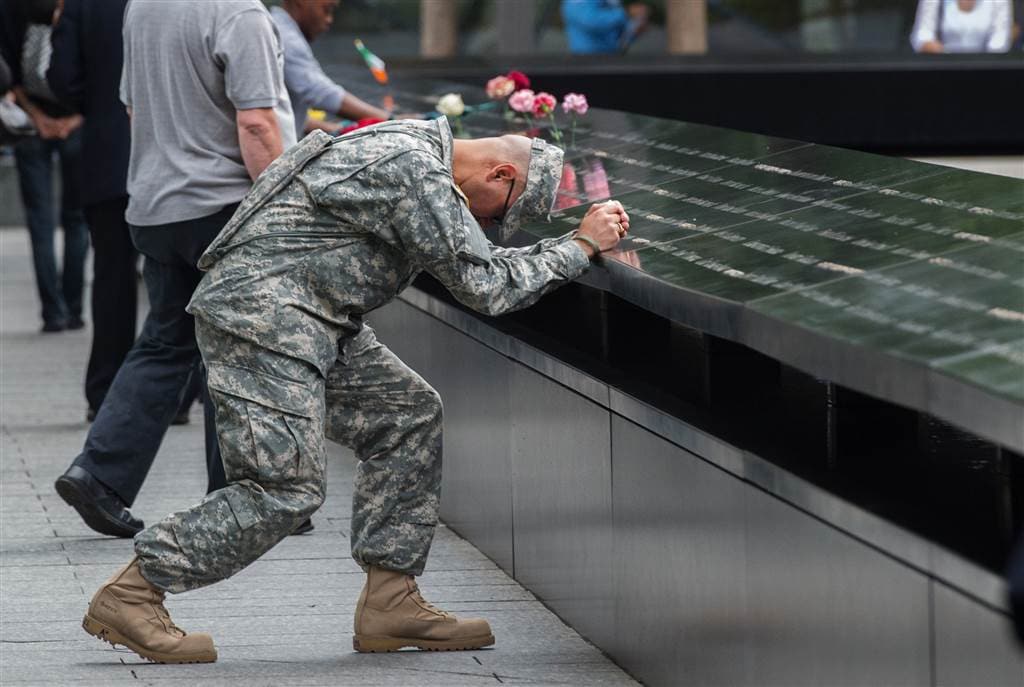 Where were you on that day? If you’re older than 25, you likely remember what you were you doing when you heard the news.

It was 14 years ago Friday when terrorists from al-Qaida, an Islamic group founded by Osama bin Laden, used hijacked commercial airliners to destroy a portion of the Pentagon in Washington, D.C., and topple the Twin Towers of the World Trade Center in New York, reducing the site to rubble and killing almost 3,000 people in the process.

The attacks prompted the Global War on Terror, which was launched by President George Bush and quickly saw the U.S. invasion of Afghanistan, a surge in military recruitment and spending and set the stage for the invasion of Iraq less than two years later.

Both wars have seen a combined 6,855 U.S. casualties, according to iCasualties, or more than 450 each year since the resulting operations – Noble Eagle, Enduring Freedom, Iraqi Freedom and New Dawn – were launched.

The Washington Post’s count is slightly less, but breaks the data down into categories, including service branch, age, sex and cause of death.

In May, 2011, U.S. forces acting on intelligence gathered from within Pakistan located bin Laden and killed him.

President Barack Obama in the last year has carried out about 6,700 airstrikes and spent some $4 billion in the fight against Islamic State extremists, or ISIS, the latest manifestation of Middle Eastern terror. 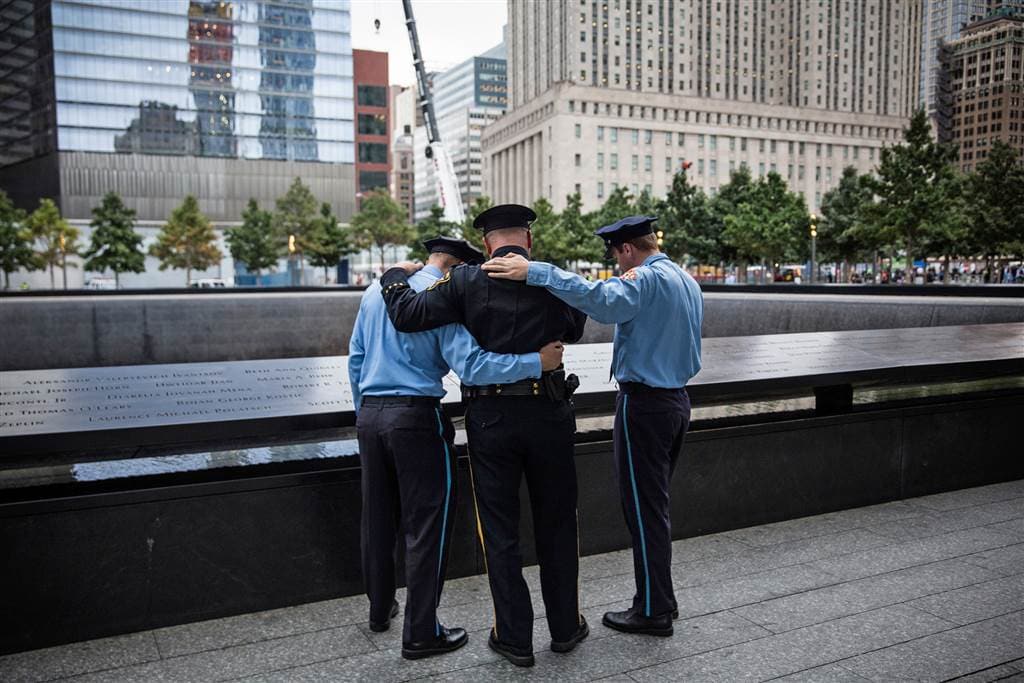 Mitch Ellicott, a lieutenant with the Sussex County Sherriff’s office, is flanked by his sons Zachary, left, and Benjamin, both firefighters in Stanhope, New Jersey, take a moment to remember a family member lost in the attacks of September 11, 2001, on the 14th anniversary of the attacks. (Photo: Getty Images) 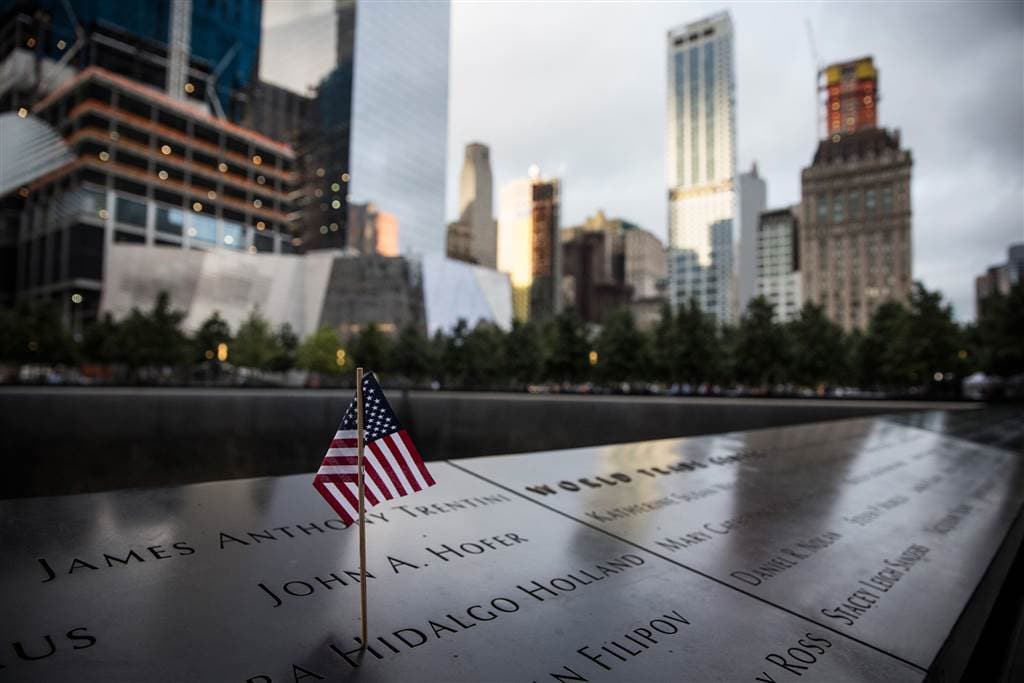 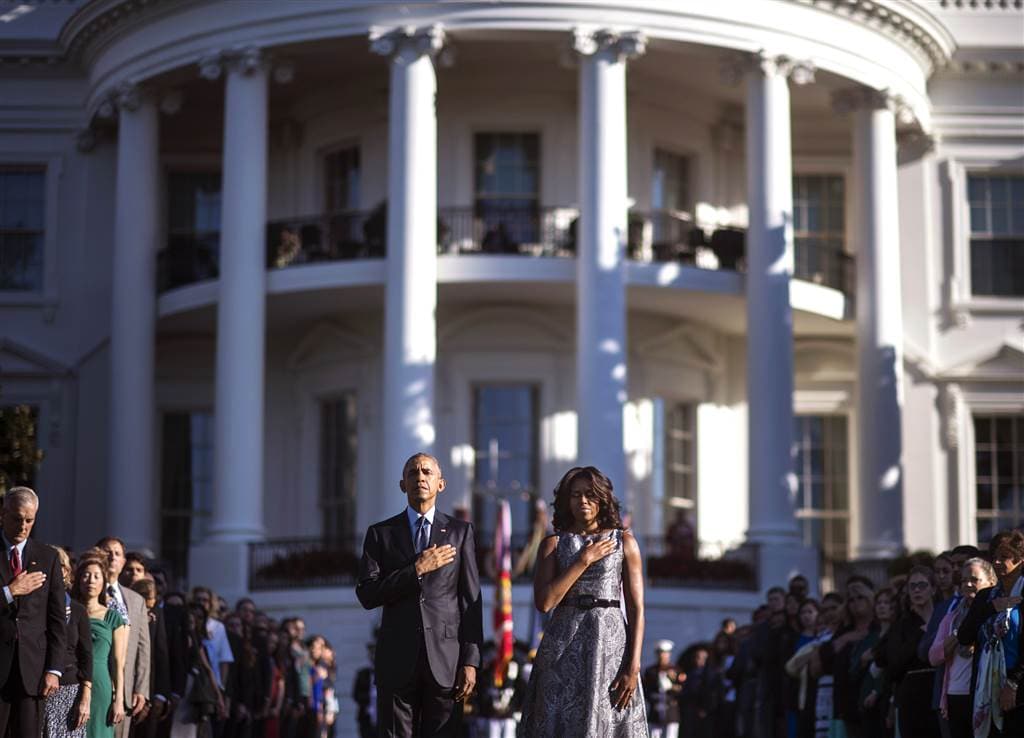 President Obama and first lady Michelle Obama observe a moment of silence on the South Lawn of the White House to mark the anniversary of the attacks. (Photo: Getty Images) 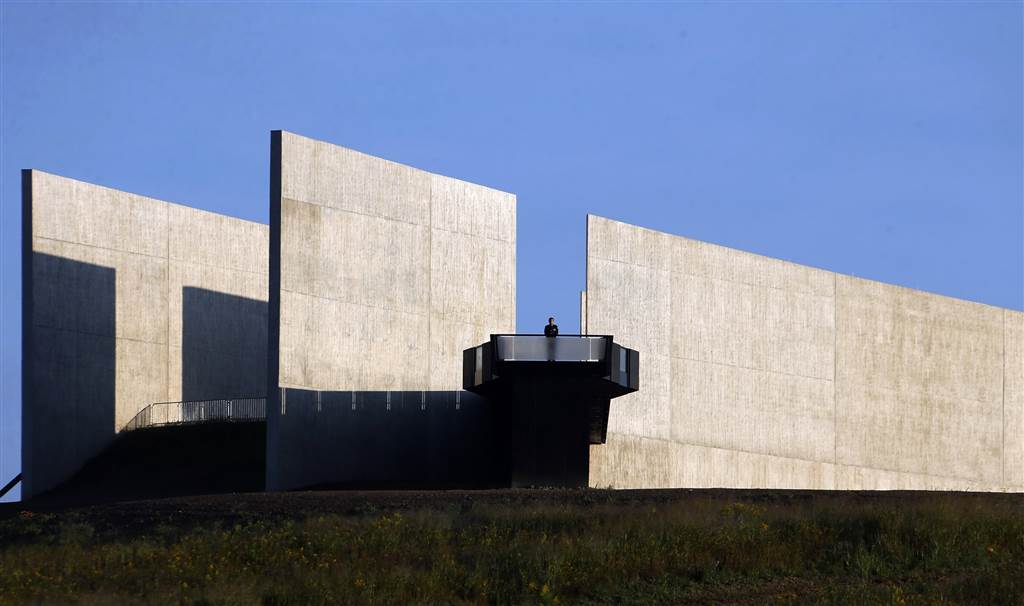 A visitor pauses on the observation deck of the Flight 93 National Memorial Visitors Center in Shanksville, Pa, on Sept. 11. Flight 93 was the only jetliner among the four commandeered by terrorists that failed to reach its intended target on Sept. 11, 2001. (Photo: Associated Press) 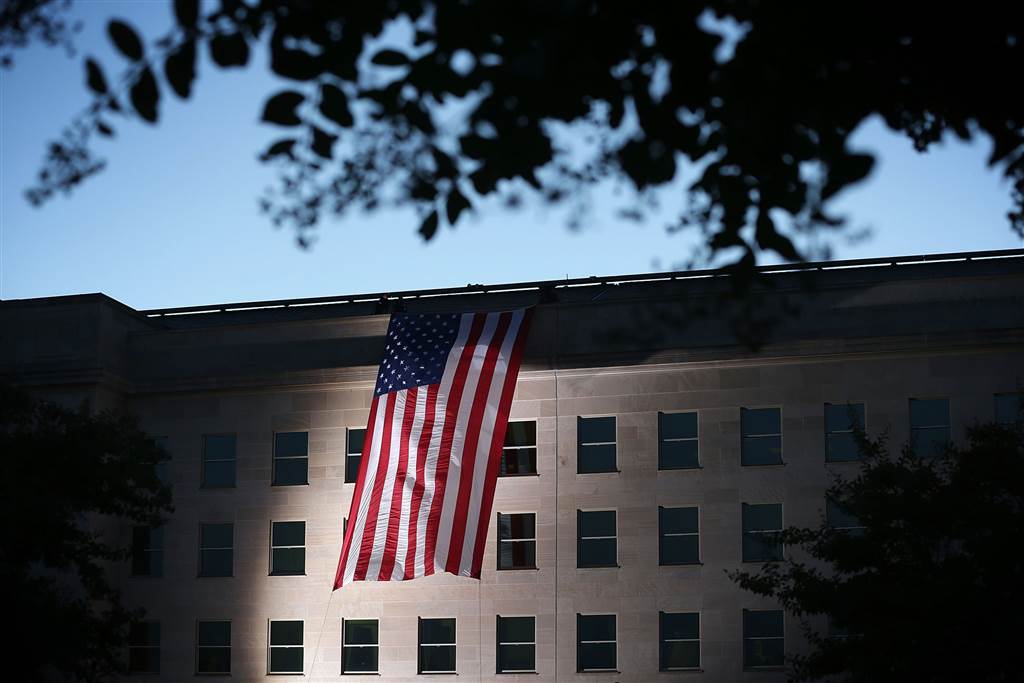 Pentagon personnel unfurl a large American flag on the west side of the Pentagon on Sept. 11 in Arlington, Virginia. (Photo: Getty Images) 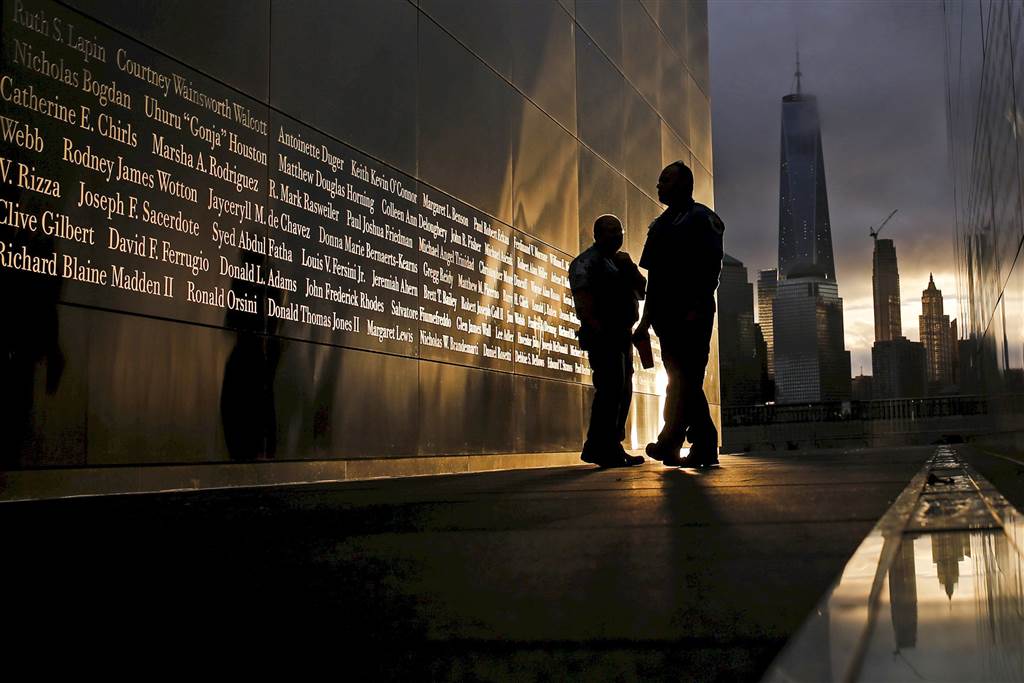 People read the names of victims at the 9/11 Empty Sky memorial at sunrise across from New York’s Lower Manhattan and One World Trade Center in Liberty State Park in Jersey City, New Jersey, on Sept. 11. (Photo: Reuters) 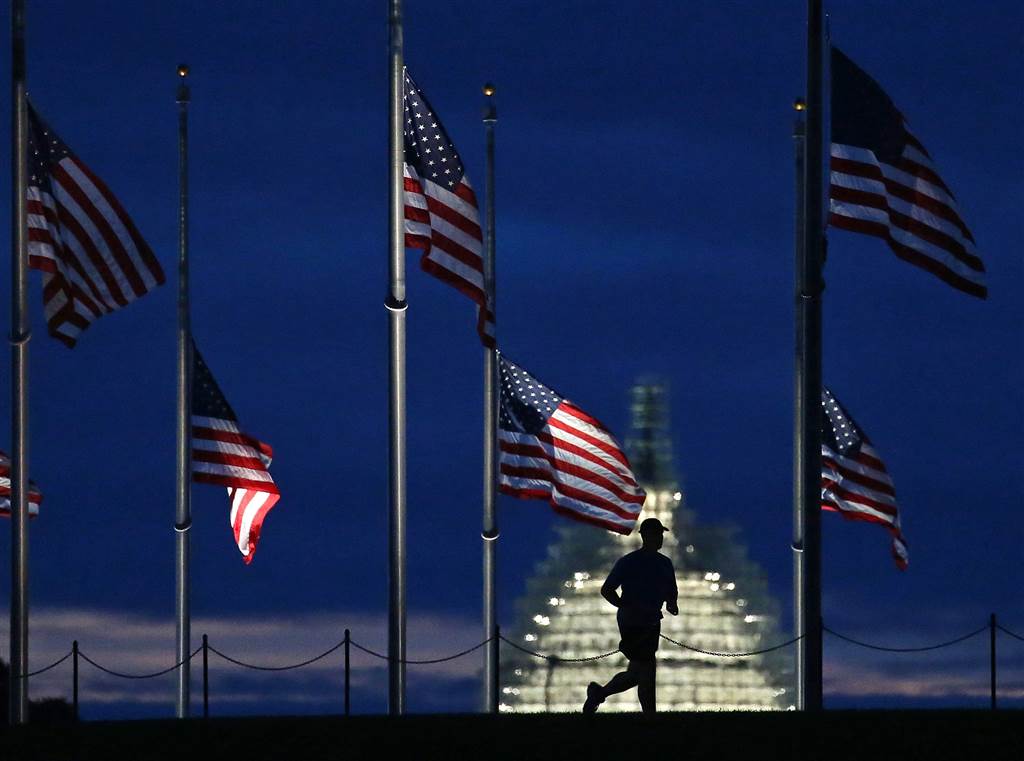 A man jogs past a row of American flags that have been lowered to half staff on the Washington Monument grounds early on Sept. 11. (Photo: Getty Images) 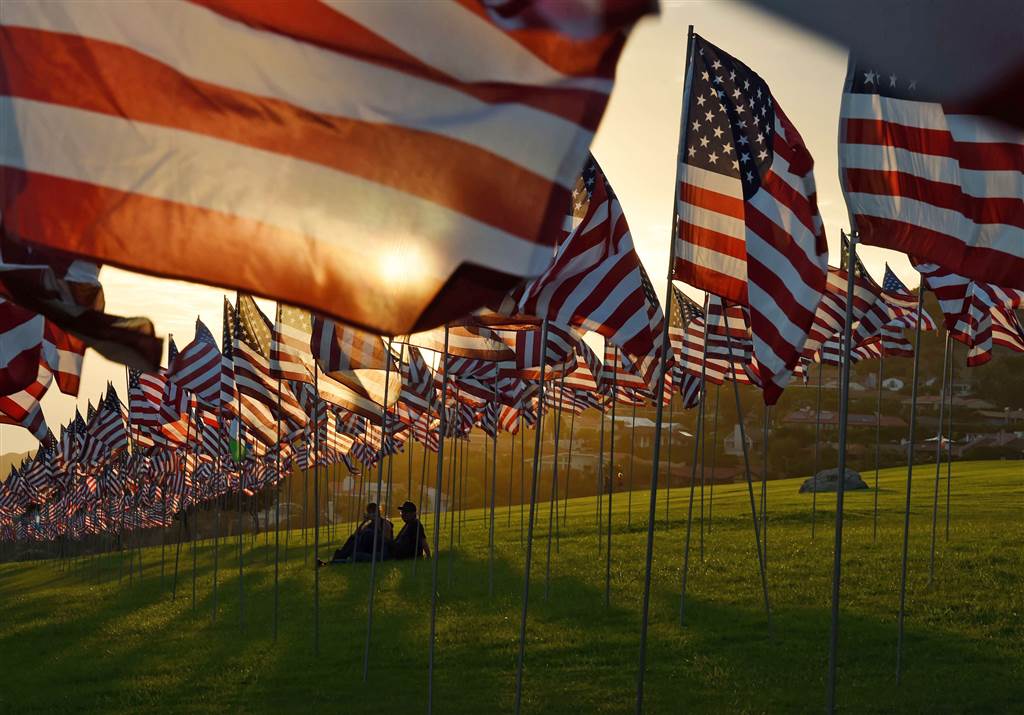 People sit among U.S. flags erected by students and staff from Pepperdine University to honor the victims of the Sept. 11, 2001 attacks at their campus in Malibu, California, on Sept. 10. The students placed some 3,000 flags in the ground in tribute to the nearly 3,000 victims lost in the attacks 14 years ago. (Photo: Getty Images) 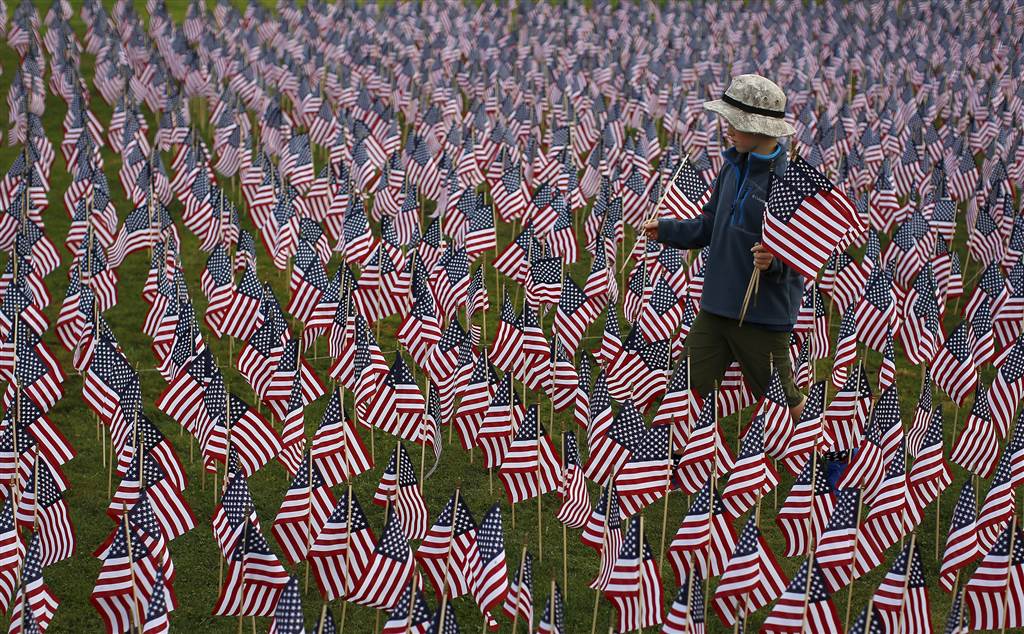 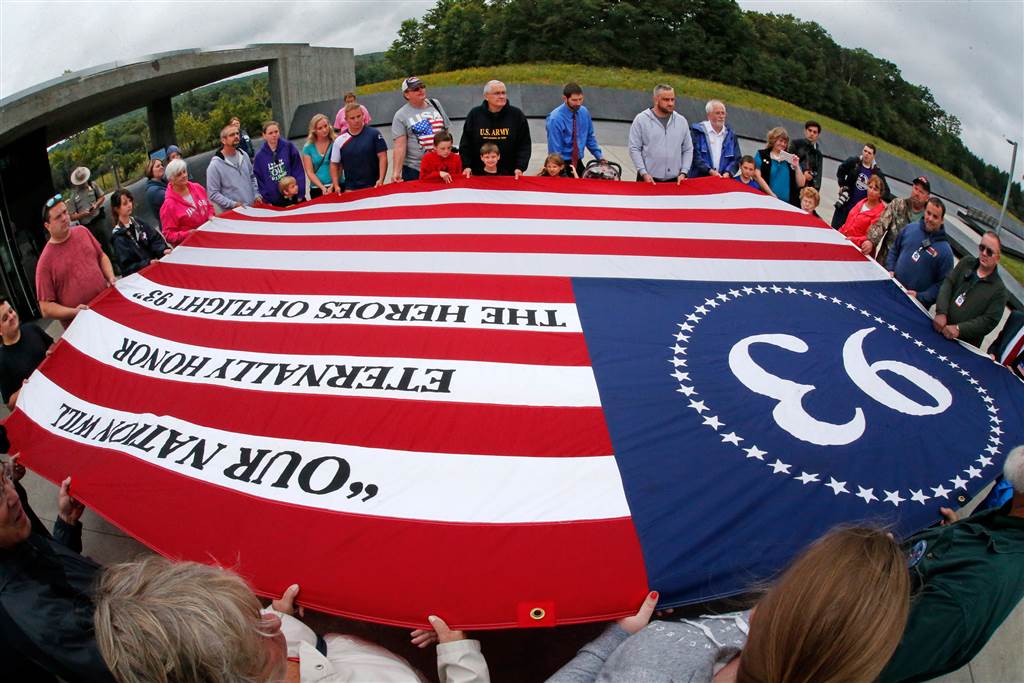 Visitors to the Flight 93 National Memorial in Shanksville, Pa., participate in a memorial service on Sept. 10. (Photo: Associated Press) 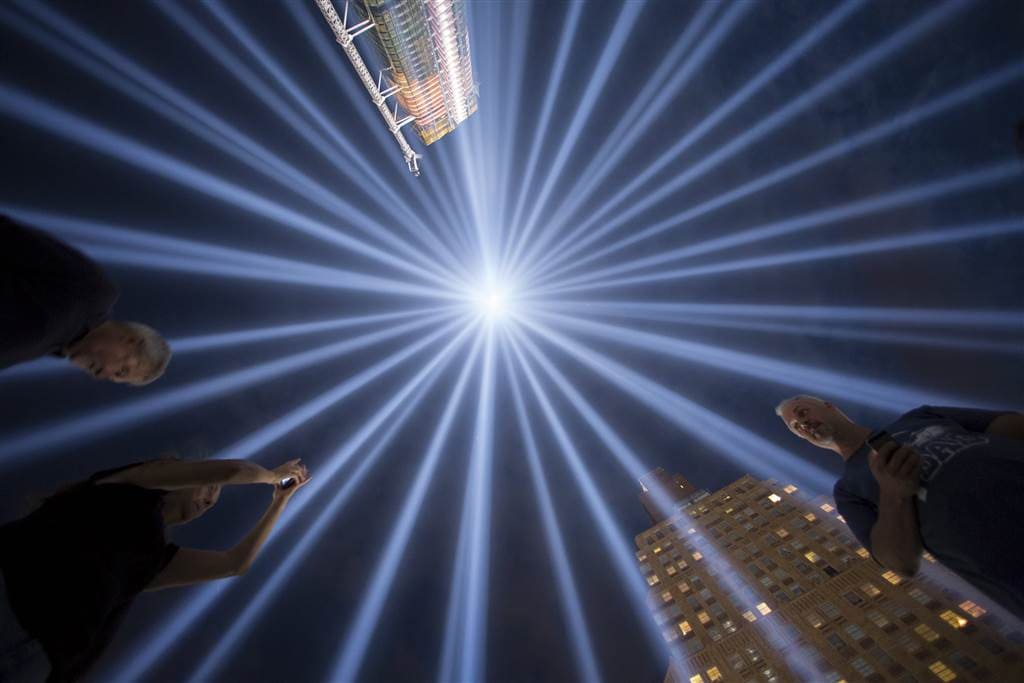 People gather at the “Tribute in Light” in lower Manhattan, on Sept. 9. (Photo: Reuters) 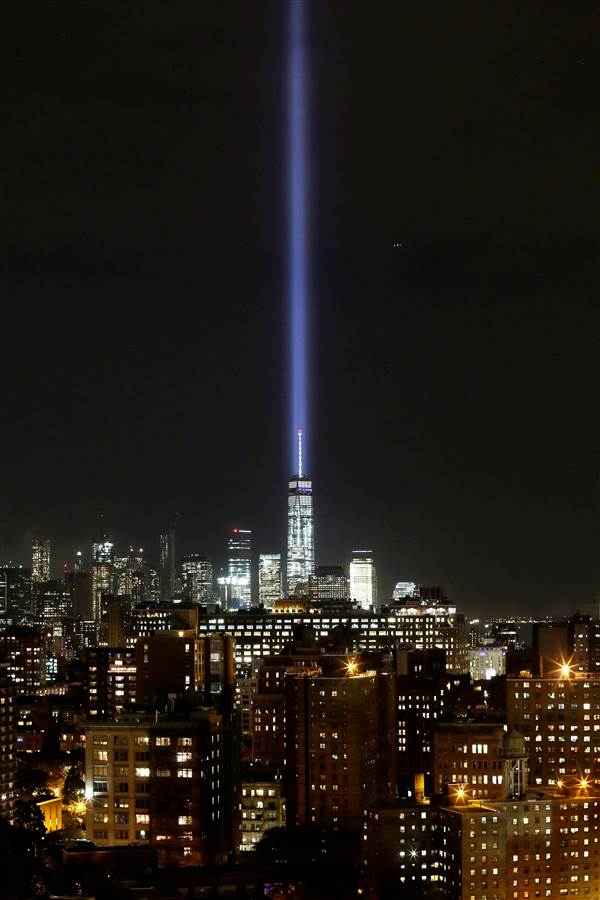 The Tribute in Light illuminates the sky behind One World Trade Center and the lower Manhattan skyline on Sept. 9. (Photo: Associated Press) 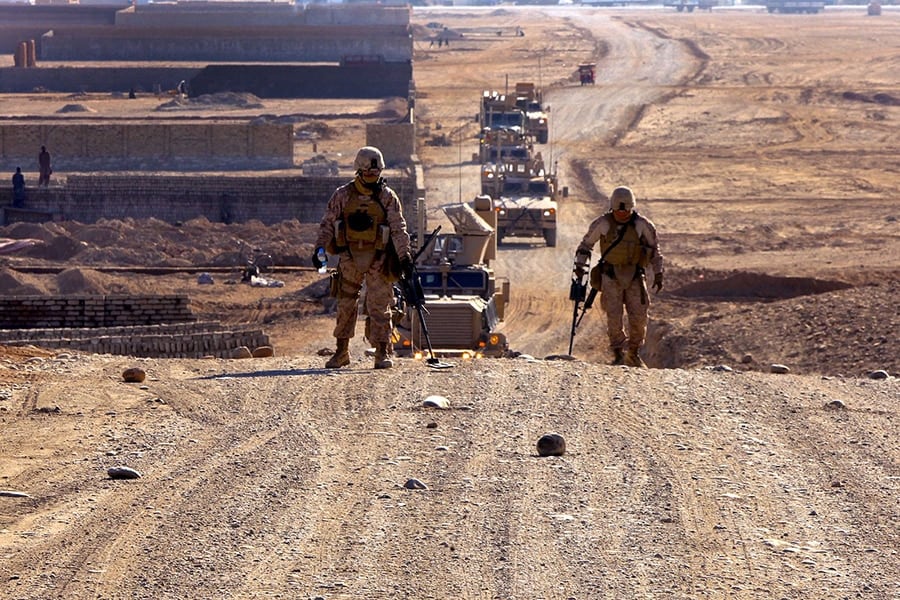 U.S. Marines use metal detectors to sweep a hill during a route reconnaissance mission of Route Red, which extends from Highway 1 to Shir Ghazay, Afghanistan, on Jan. 1, 2012. The Marines are assigned to the 2nd Platoon, Alpha Company, 9th Engineer Support Battalion, 2nd Marine Logistics Group. The purpose of the mission was to document inclines and declines in the route, sharpness of curves, the shortest width during the route, and where culverts were located or needed to be placed. (Photo: Department of Defense) 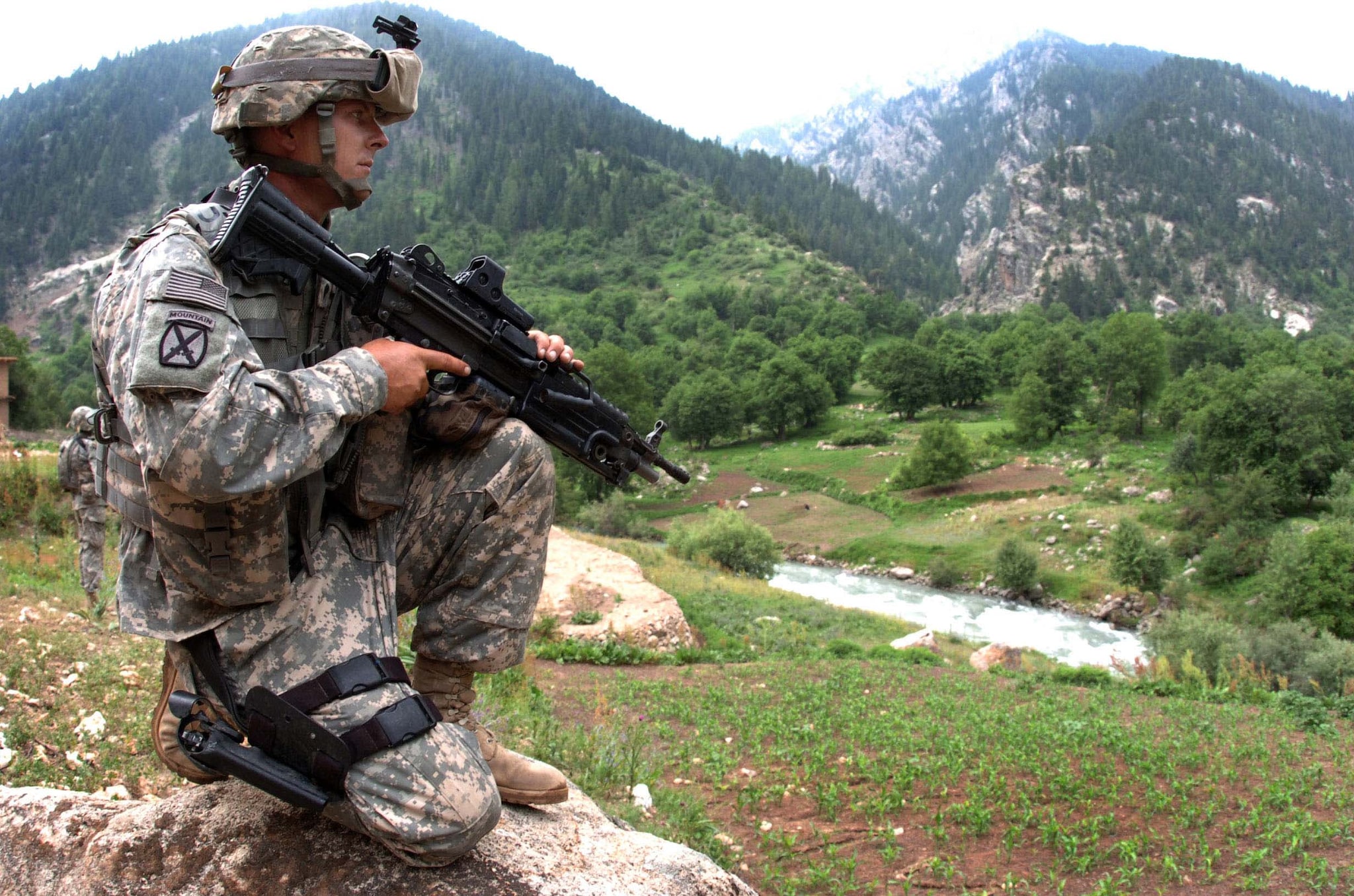 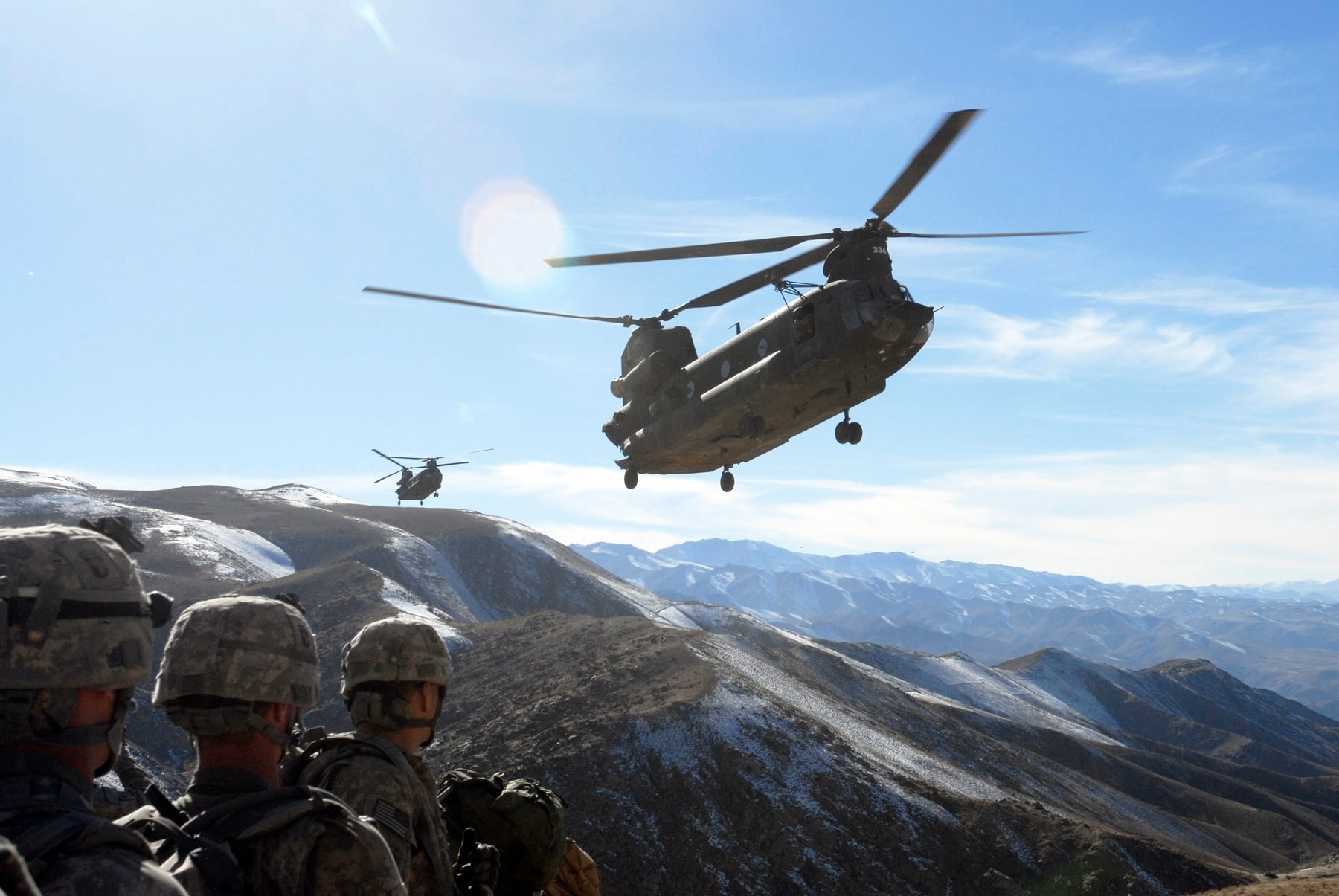 Standing by on a hill top, Soldiers with the 101st Division Special Troops Battalion, 101st Airborne Division watch as two Chinook helicopters fly in to take them back to Bagram Air Field, Afghanistan Nov. 4, 2008. The Soldiers searched a small village in the valley below for IED making materials and facilities. (Photo: Spc. Mary L. Gonzalez / CJTF-101 Public Affairs) 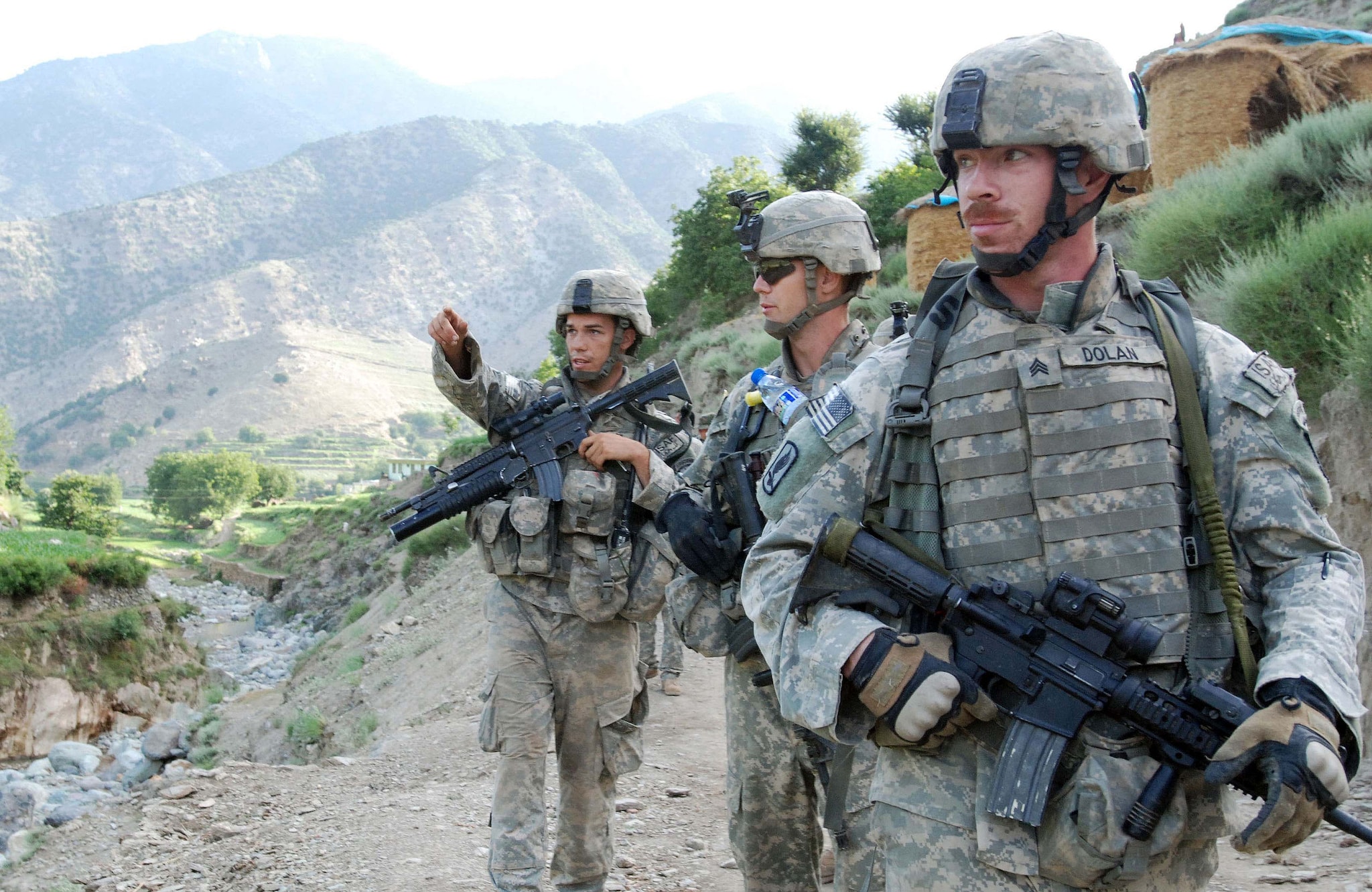 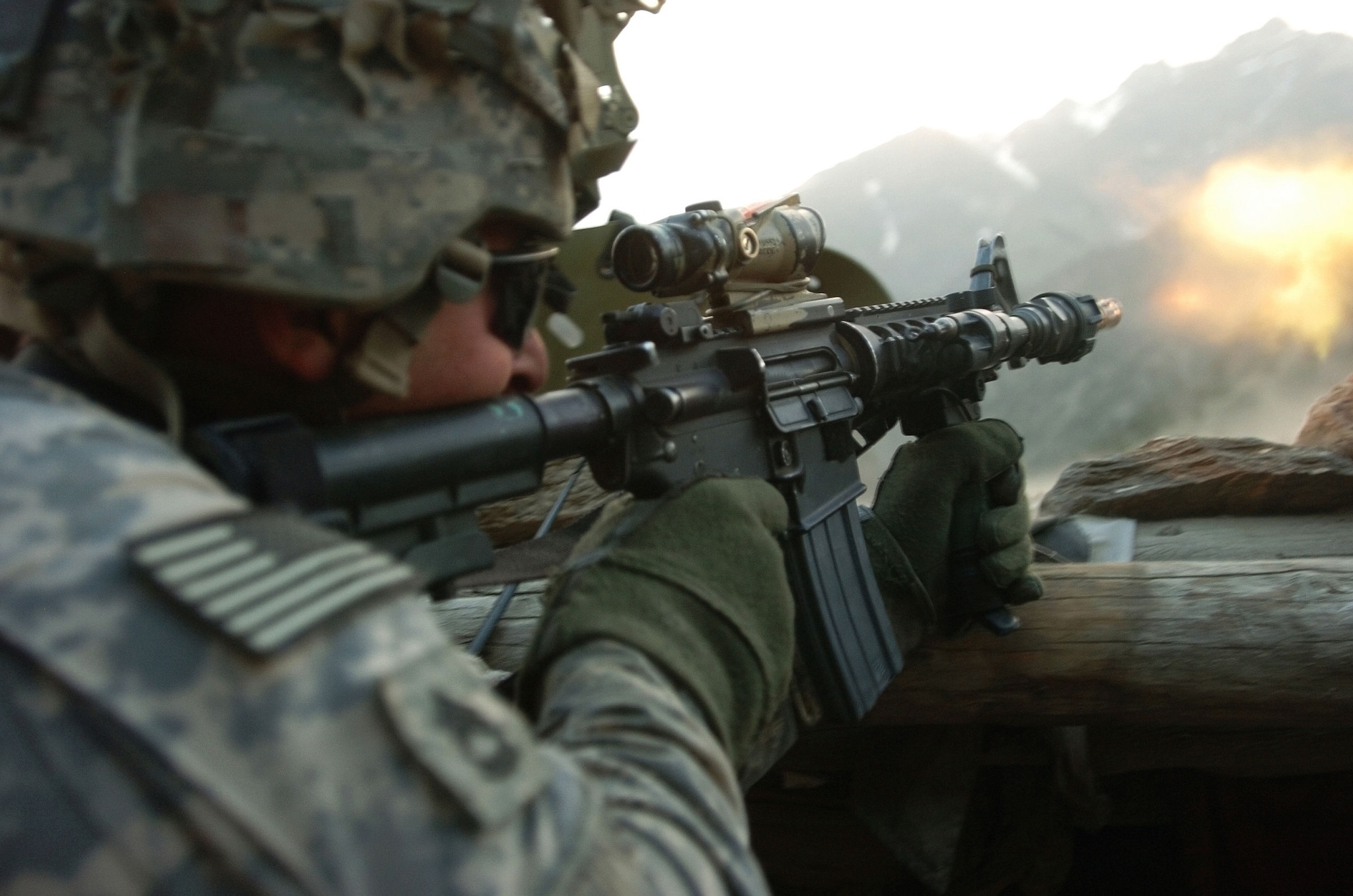 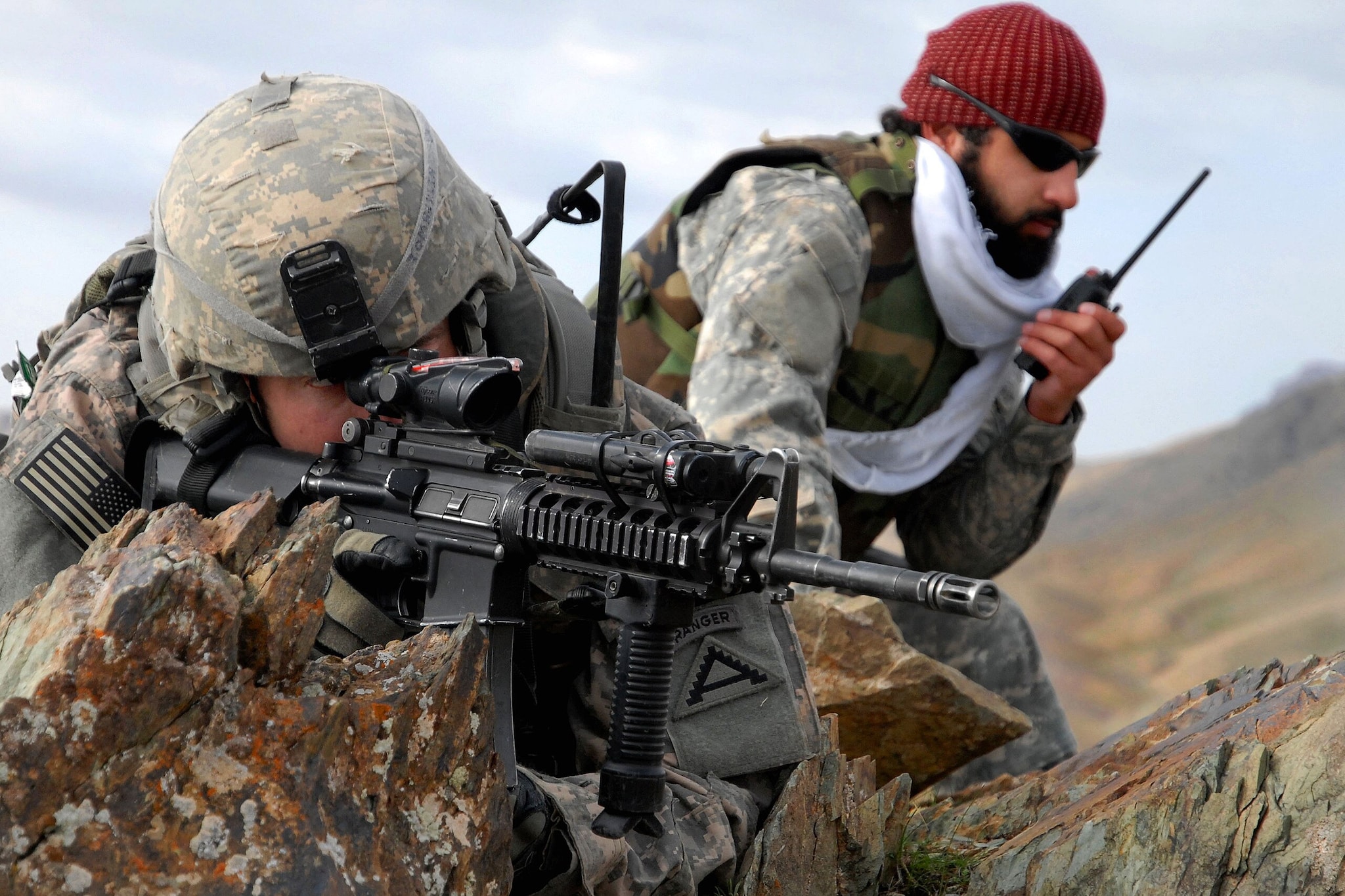 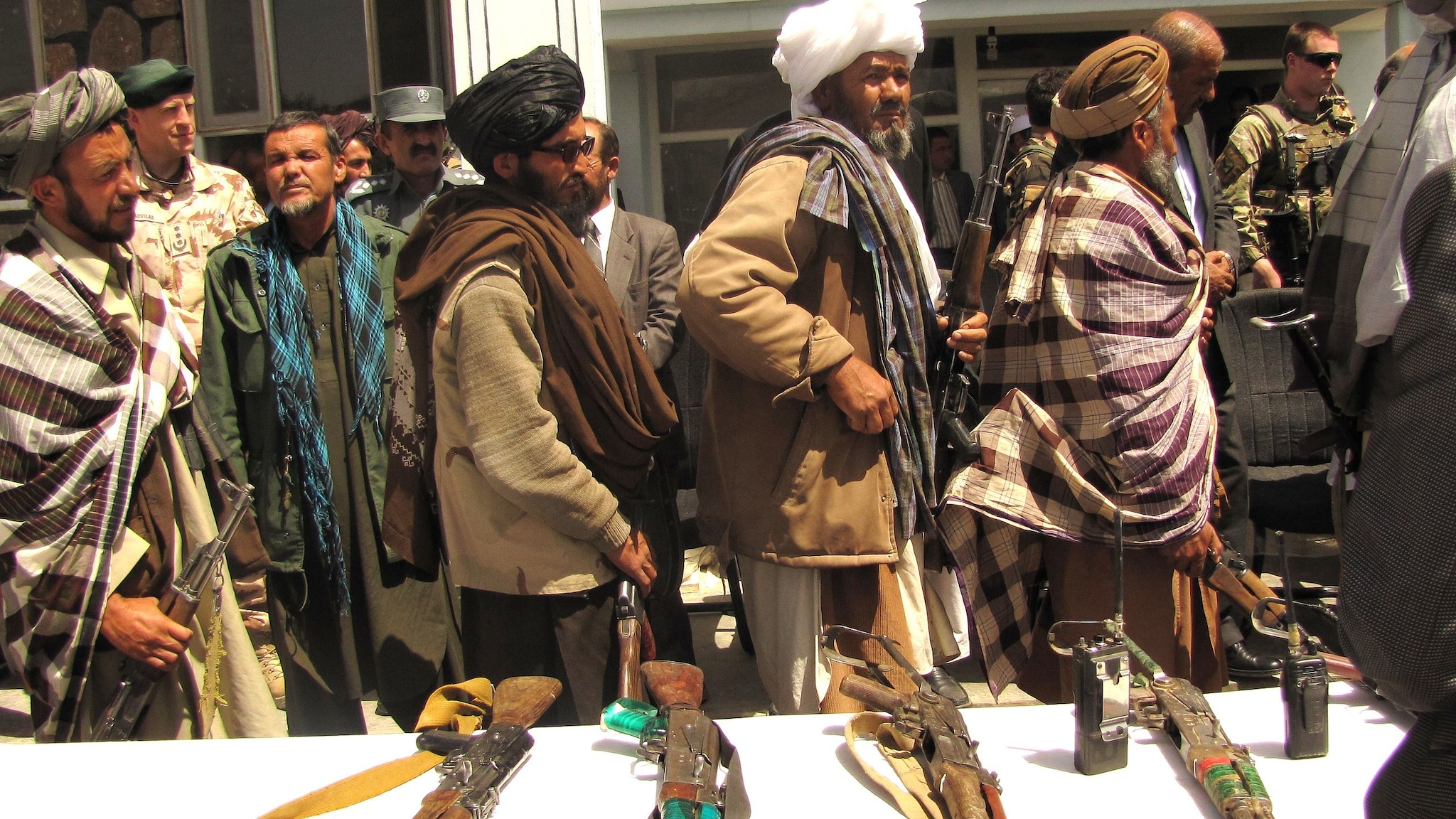 Former Taliban fighters line up to handover their Rifles to the Government of the Islamic Republic of Afghanistan during a reintegration ceremony at the provincial governor’s compound. The re-integrees formally announced their agreement to join the Afghanistan Peace and Reintegration Program during the ceremony. (Photo: Department of Defense)