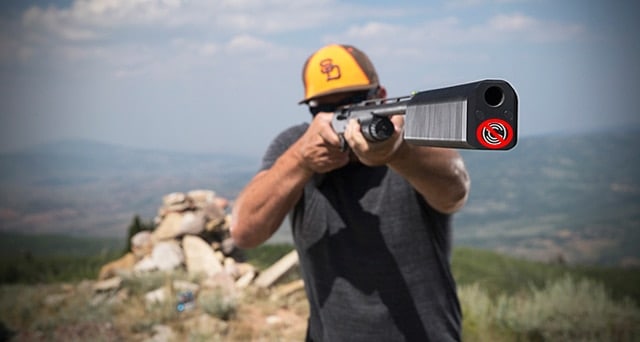 A Utah gun store filed suit against popular gun accessory maker SilencerCo over the naming of its shotgun suppressor called the Salvo 12.

Salvo Guns filed a civil suit with seven counts of action in a Salt Lake City federal court last month against SilencerCo, which is also based in Utah, for the unauthorized use of a trademark.

The store became the registered owner of the trademark “Salvo Guns” in 2013. According to the complaint, it has established common law ownership of the names and marks “Salvo” and “Salvo Guns.”

Last summer, SilencerCo introduced the Salvo 12, which is an infringement on the store’s trademark and has confused consumers, the lawsuit says.

“The injury to Salvo is and continues to be ongoing and irreparable,” the lawsuit says. “An award of monetary damages alone cannot fully compensate Salvo for its injuries and Salvo lacks an adequate remedy at law.”

The lawsuit asks the court for an award that covers damages and possible profits lost multiplied by three.

SilencerCo declined to comment directly on the lawsuit, but a spokesman tells Guns.com in an email: “SilencerCo will handle these matters through the proper legal channels.  It is our policy not to comment on legal proceedings.”

For three consecutive years SilencerCo has been ranked in the Inc Magazine list of top 5,000 companies. The magazine estimates the company raked in $16.6 million in revenue for 2014 and has grown by 650 percent over the past three years.

Last week expanded once again by launching a new company and facility in Austin, Texas, called SilencerCo Weapons Research, which will focus on the research and development of new technologies for shooting sports.

The company faced one other legal dispute in federal court since it opened shop in 2008. Advanced Armament Corp. claimed SilencerCo infringed on a patent in October 2013, but voluntarily dismissed the case two months later.