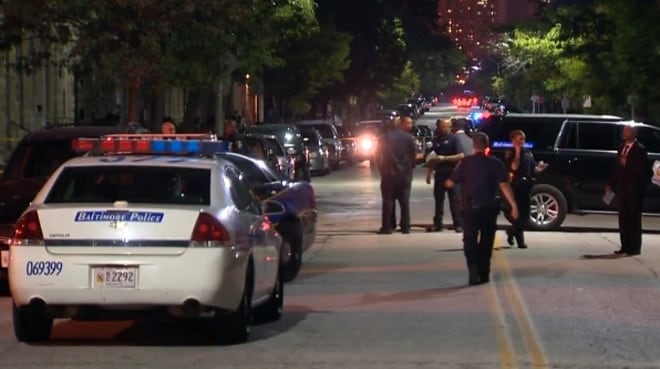 The number of homicides this year have already passed the number for all of 2014. (Photo: CBS Baltimore)

Among the victims with non-fatal injuries was a 9-year-old girl, who was with Kirk Butler, 45, when he was approached by at least one suspect around 10 p.m. As the suspect opened fire on Butler, the child was also grazed by a bullet. Butler was transported to the hospital where he was pronounced dead a short time later, and although the young girl is expected to make a full recovery, the incident left authorities angry, according to reports from a local CBS affiliate.

“These bad guys who were involved in this incident shot a 9-year-old girl. And that should be something that outrages the entire community because it certainly outages us as a police department,” said Baltimore Police spokesperson T.J. Smith.

The girl was the second young child this month to suffer injuries as an innocent bystander. Authorities said it is devastating that children often land in the crossfire of violence that has nothing to do with them. Smith said it is the kind of thing “that shocks the conscience.” Police have since put out a wanted poster for the suspect in girl’s shooting, who Smith referred to as a “coward.” 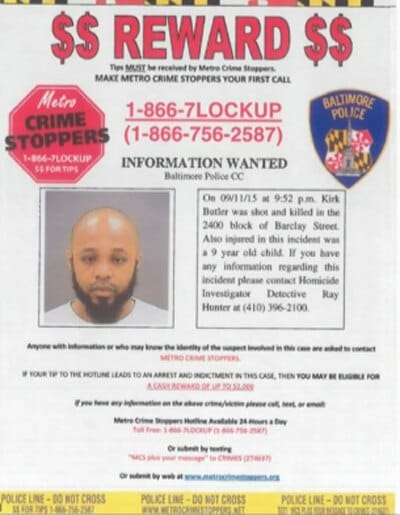 The suspect in a weekend shooting that left one man dead and a 9-year-old girl injured. (Photo: BPD)

“That’s not something we should ever get used to,” added Smith. “There’s rules to the game. And those of us who are very familiar with Baltimore know that sometimes there’s bad-guy-on-bad-guy violence. And it’s never acceptable, but when children are in the midst of something like this, that’s a huge problem for all of us.”

In spite of a violent weekend, authorities indicated that recent initiatives to reduce crime are making a difference, with arrests and gun seizures up 40 percent in two months. Still, with several months remaining, the city has already seen more homicides this year than all of 2014, with nearly 90 percent of those murders being shootings.

“We know we have violent repeat offenders with unfettered access to guns,” said Rawlings-Blake. “We’re going to continue to focus on them.”