Armed robber, victim both die during exchange of gunfire 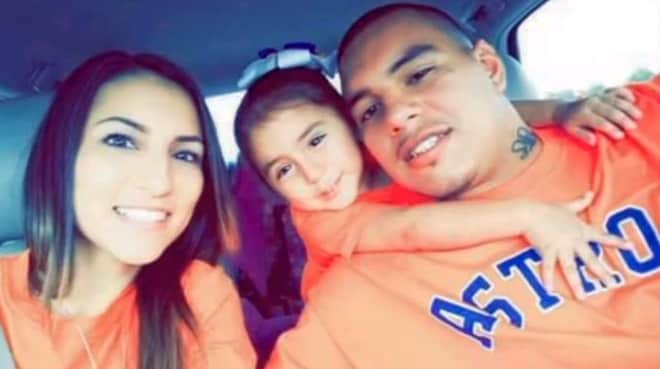 “He just pulled out a gun and told me I needed to stay there, because he had one in the chamber,” said Deana Precella, whose husband was shot and killed during an attempted robbery. (Photo: ABC 13)

An attempted robbery outside of a Houston ice cream shop Sunday night ended with the suspect dead and a father fatally shot while protecting his wife and young daughter.

Authorities said Erasmo “Eddie” Alaniz, his wife, Deana Precella, and their 2-year-old daughter had just pulled into the parking lot around 5 p.m. when the suspect jumped into the back seat of the vehicle, aimed a gun at Deana and said, “Give me all you have,” according to a report from KHOU. A struggle ensued between the two men, and while Deana was able to slip out of the car, the toddler was left in her car seat to witness the entire ordeal.

Eventually, the struggle turned into a gunfight, with both Alaniz and the suspect exchanging gunfire with one another. Both men were shot during the exchange.

When police arrived, Alaniz was found still sitting in the driver’s seat of the vehicle, while the suspect had crawled out of the vehicle and stumbled across the parking lot for a short distance before collapsing. Both men were pronounced dead at the scene.

Neither the mother nor the child were injured during the altercation.

The suspect’s name has not yet been released, pending notification of his family, but witnesses told investigators a black male was seen driving away from the scene in a Dodge Charger.

The distraught, recently widowed woman spoke with a local ABC affiliate the day after the shooting. She admitted their marriage – and her husband – were far from perfect, but said the little girl and Alaniz’s son meant the world to him. Deana, as well as other family and friends, called Alaniz a hero who died protecting the people he loved.

Authorities confirmed Alaniz had a lengthy criminal record and had been in and out of jail, with his most recent stint just five months ago. However, investigators believe the attempted robbery was a random act and have no evidence at this time to suggest otherwise.

“A lot of this stuff has been happening pretty regular,” said area resident Nelson LaFleur. “But it’s unfortunate, you work hard for your entire life and people try and come and take your things.”