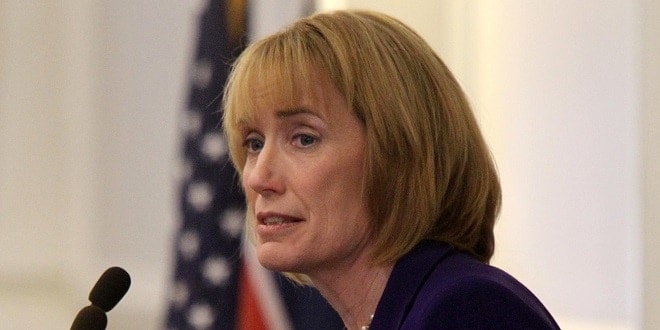 Gov. Maggie Hassan (D) promised gun control groups she would veto a constitutional carry bill earlier this year, but a potential override vote may be in the cards this week. (Photo: Jim Cole/AP)

Lawmakers will convene in Concord this week to mull over attempts to overturn bills vetoed by Gov. Maggie Hassan (D) to include one on pro-gun reforms.

In July, Hassan dropped veto ink on a Senate bill passed by the majority of state lawmakers that would have made the Granite State the eighth to allow concealed carry without a permit. The legislation, Senate Bill 116, was introduced by state Republicans and passed the Senate 14-9 in February before winning over the House in a 212-150 vote in April.

On the eve of its final vote, Hassan met gun control advocates and pledged to veto the measure if it reached her desk, which she kept.

Now the New Hampshire Republican State Committee is calling for a bipartisan effort to override some of Hassan’s veto work when the legislature reconvenes on Wednesday. While two budget bills are taking center stage in the veto session, the constitutional carry measure is seeing renewed attention from both Second Amendment and gun control advocates.

“Gun extremists in New Hampshire are back at it again,” reads an alert by former New York Mayor Michael Bloomberg’s Everytown for Gun Safety group posted Sunday. “They want to override Governor Maggie Hassan’s veto of a dangerous gun bill that would have let people carry hidden, loaded handguns in public without a permit.”

The National Rifle Association, who is supporting a potential veto override, point out that New Hampshire had constitutional carry until 1926 and currently has very liberal open carry laws, but is in need of the reform.

“In New Hampshire, existing state law recognizes the right of any citizen who can legally own/possess a firearm to carry it openly, either loaded or unloaded, anywhere in the state not prohibited by law,” reads a statement issued Monday by the NRA’s Institute for Legislative Action. “Because law-abiding citizens can carry a firearm openly without a permit, they should not become criminals just because they put on a jacket or place their firearm in their purse or briefcase. Law-abiding citizens do not suddenly turn into violent criminals just because they choose to conceal their firearm.”

According to New Hampshire laws, the legislature would have to pass SB 116 by a two-thirds majority vote in both chambers. In the Senate, Republicans hold 14 of 24 seats and would need to count all of their members as well as pick up two Democrats to carry an override.

In the 400-seat House, the GOP would need to keep all of its 239 votes and convince two dozen lawmakers on the other side of the aisle that New Hampshire is better served by going constitutional carry despite the wishes of the governor. On its first trip through the House, a number of Democrats cast their lot against Hassan already, meaning a fight could be on as 2016 is an election year for all New Hampshire state lawmakers – the Governor included.