Pentecostal pastor works to reduce gun violence in St. Louis one woman at a time 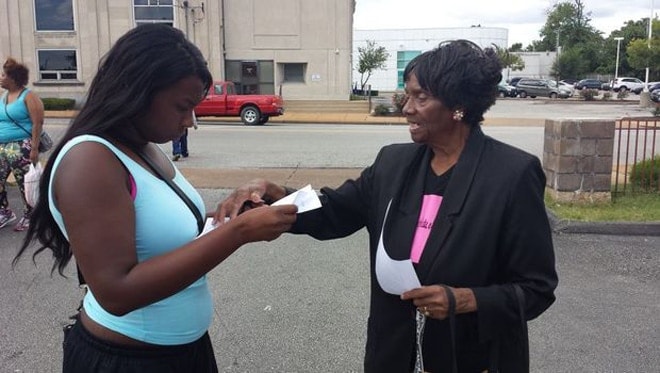 Brown said she prefers to take to the streets to spread her message, which gives her the opportunity to look people in the eye. (Photo: Jesse Bogan / St. Louis Post-Dispatch)

An 86-year-old Pentecostal pastor took the streets of St. Louis over the weekend, passing out informational fliers and urging residents to take action to reduce violence.

“Mothers, grandmothers, sisters and aunts and fiancees … utilize your influence to save your children,” Rev. Bessie Mae Brown told the St. Louis Post-Dispatch. “People are dying. Children are dying, and I can’t hardly take it. I am telling you the truth, I can’t.”

Brown, who in addition to serving as pastor of a small St. Louis area church also runs a ministry to reach jail inmates, wants women in particular to talk with their children about guns and safety. Brown admits that while she realizes they can not take away all of the city’s violence, she does believe “by the grace of God” she and others can at least make a difference. Brown said her work with inmates has given her a sense of purpose and helped her to clearly see there are two groups of people effected by every shooting.

“There are two families involved,” Brown pointed out. “The shooter’s and the victim’s family. And that’s very, very devastating.”

This year alone, St. Louis has seen over 140 homicides.

Margaret Garb, a Washington University history professor who studies American activism, believes Brown’s method for reaching people in the community has the potential to touch people on a more personal level and therefore cause a greater impact than some other strategies, such as publishing studies on gun safety.

“Walking door to door, talking to people might be the most effective strategy at this point,” Garb said. “That could be more powerful and compelling than reading another tweet about the problem.”

For the most part, Brown’s message is well-received by those with who she speaks, most of them in agreement that the violence is out of control.

Brown believes youth need to be taught more about love, respect, the value of human life and consequences of taking a life. According to one of the fliers she passed out over the weekend, “Communication with love and respect is a great tool, and a powerful weapon to be used when aggression and hatred is in control.”

Brown uses some of her time to talk with men, but primarily focuses on reaching women because she believes, “The hand that rocks the cradle can rule the world.”