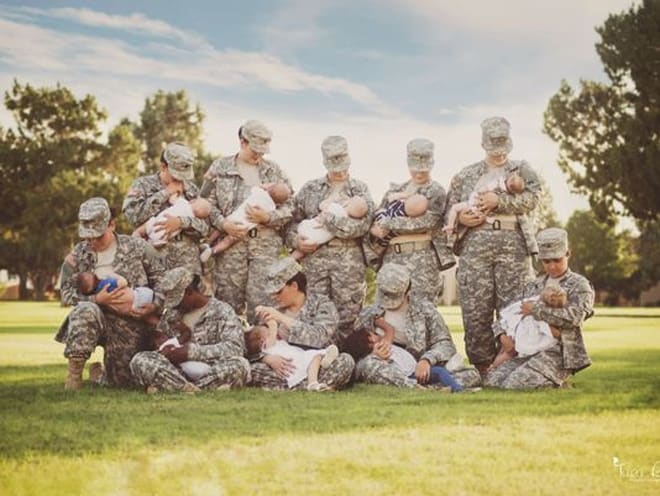 When photographer Tara Ruby enlisted breastfeeding Army moms to volunteer for a photo shoot, her intentions were to spruce up the Butterfly Room at Fort Bliss, a room designed for service moms to use to nurse or pump, but she never thought one photo in particular would get the attention that it has.

Ruby called the fact that they were trending on Facebook “crazy.”

“Today I believe we made history,” she added in a post on her Facebook page Friday. “To my knowledge, a group photo to show support of active-duty military mommies nursing their littles has never been done. It is so nice to see support for this here at Fort Bliss.”

But not everyone appreciated the photo. In fact, after posting the photo to her professional page, Facebook removed it. But Ruby – and other supportive moms – were persistent and reposted the photo, which has since remained.

Ruby’s husband is assigned to the 1st Armored Division and she offered to take the photos of individual moms with their babies to decorate the Butterfly Room, noting that no such facilities existed for moms when she served in the military from 1997 to 2001. Her casting call got a “huge response” and at the end of the session gathered all of the volunteers together for a single group photo – the photo which has since gone viral.

“My intent is to show unity between the women and their children,” Ruby said. “This isn’t about an individual soldier. Nobody’s looking at the camera. This is literally about the fact that they can be a soldier, they can be a mother, and they can do it all at the same time.”