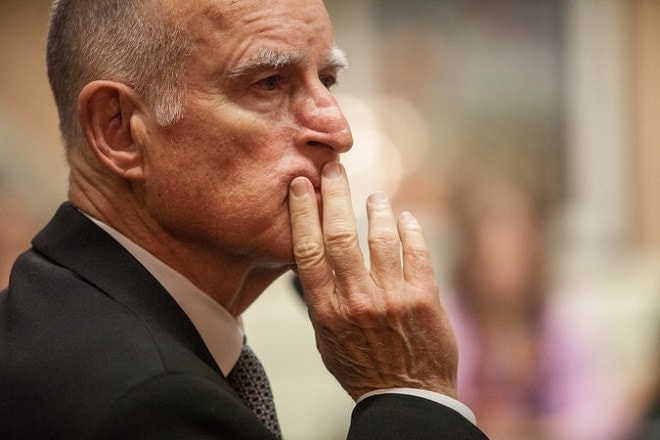 Gov. Jerry Brown has a choice to make in the coming week about adding gun bans to a number on minor crimes. (Photo: Max Whittaker/The New York Times)

A proposal to expand the list of crimes that trigger an automatic 10-year ban on gun possession has passed the legislature and has been presented to Gov. Jerry Brown (D) for signature.

The bill, backed by a lawmaker who helped write last year’s gun violence restraining order legislation, would add such crimes as selling ammunition to someone under the age of 21 to current ones that mandate a ban on gun ownership and purchases for a decade. Introduced in April, it passed the Senate by a 24-15 vote and the Assembly 46-30 earlier this month. Confirmed by the Senate, it is now under review by the governor’s office.

The backer of the legislation contends it will help keep guns out of the hands of those who shouldn’t have them.

While the measure has the backing of a number of law enforcement lobby groups as well as gun control organizations, including the Brady Campaign to Prevent Gun Violence and Coalition Against Gun Violence, at least one law enforcement official – Shasta County Sheriff Tom Bosenko – has gone on record citing pitfalls in the legislation that could land law-abiding gun owners in hot water.

“The addition of these misdemeanor offenses to the prohibited category that include the ‘transfer’ of firearms or ammunition could entrap family members that are giving firearms to relatives and are unaware of the requirements for firearms transfers through licensed dealers,” Bosenko told lawmakers in the Assembly last month. “The addition of the ‘giving possession of ammunition to minors’ to the prohibited category could criminalize the simple act of a family member providing ammunition to other family members that are hunting or recreationally shooting.”

Further, the California State Department of Finance is opposed to the bill, which it cites will add an estimated $223,000 in expenditures to the state treasury while adding to the number of inmates in both state and county jails, which are currently approaching 137 percent capacity.

The state is currently under orders from the U.S. Supreme Court to lower its prison population which had led to mass early releases of inmates, large scale transfers to out of state facilities and a voter initiative to drop a number of felonies to misdemeanors.

Presented to Gov. Jerry Brown on Sept. 11, he has 12 days to review the bill before making a decision to sign or veto.