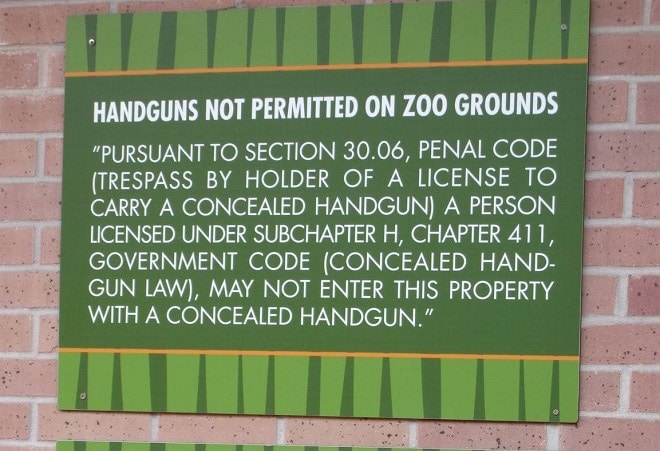 These signs at the Houston Zoo are now an endangered species, bordering on extinction. (Photo: Texas Law Shield)

Following pressure from Second Amendment advocates, the city of Houston ordered the privately-run zoo located on city-owned land, to take down its “no guns allowed” signs.

Established in 1922, the Houston Zoo, which sees in excess of 200,000 visitors per year, has long posted an official “30.06 sign” as required by state law forbidding guns on the property under its control. However, as brought to the attention of the city by an attorney for a gun rights group, the zoo operates on 55 acres of public land inside Hermann Park in Houston, making any ban illegal.

This led to the city asking the popular tourist destination to take down the signs, which they did pending investigating the legal implications of the issue.

“Effective immediately, the Houston Zoo will not ask anyone who is lawfully permitted to carry a concealed legal hand-gun to stow their weapon in their vehicle while visiting the zoo,” reads a statement to local media. “We do recognize that this has the potential to confuse or concern our guests and members and we want to emphasize that this will not alter our number-one priority, which is the safety of our guests, employees and animals.”

Attorney Edwin Walker with Texas Law Shield, as noted by the Houston Chronicle, brought the matter to the attention of city officials and the zoo. Walker said he had planned to pursue the matter with the state Attorney General before the signs were stricken.

A bill authorizing fines of up to $10,000 against local governments posting signs restricting carry of concealed handguns by lawful permit holders was signed into law in June and took effect Sept. 1.

The news from Houston had gun control groups howling.

“After pressure from the gun lobby, the Houston Zoo was forced to remove signs prohibiting guns from the premises,” reads a statement Tuesday by Moms Demand Action. “The center of family recreation in the city is being forced – against their will – to allow guns into a space previously reserved for family fun, education and preservation.”