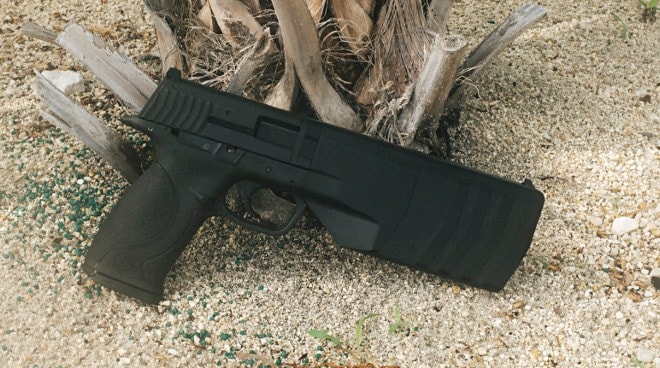 Dubbed the Maxim 9, for Hiram Percy Maxim, inventor of the Maxim Silencer, and chambered for 9mm Luger pistol, the handgun sports an eccentric, rectangular suppression chamber that extends from the chamber forward and hangs down to the trigger guard.

It’s a prototype based on the Smith & Wesson M&P 9, and SilencerCo is keeping the wraps on concrete details for now. The prototype is hearing-safe with standard 9mm ammo and that sets a great standard for the final product.

They have three other new products that are just as attention-worthy, the Osprey Micro and Hybrid, a pair of suppressors, and the first SilencerCo Weapons Research product, the Radius long-range rangefinder. 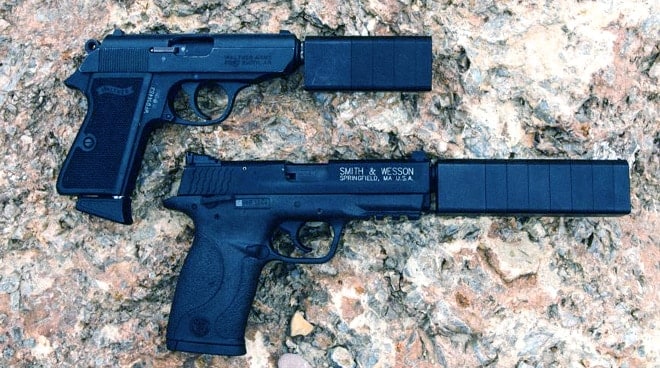 The Osprey Micro is a rimfire suppressor, drawing from two of their most successful designs, the Osprey centerfire suppressor series and the Salvo 12 shotgun can. The Micro is modular, with removable polygonal baffles, and is rated for full-auto fire. By using discrete baffles the Micro is also easy to clean, a real plus when it comes to shooting rimfire ammo.

This allows shooters to size the Osprey Micro to fit their needs. Thanks to the offset baffles, it’s already compact with a full length of 4.6 inches but it can be shortened all the way down to 3.1 inches long. The Osprey Micro is on its way to stores now with an expected release this October with an appealing $599 MSRP.

The use of eccentric baffles also lets users stick with factory sights; the suppressor doesn’t rise over the bore, blocking standard sight pictures. This also makes it easy to carry it holstered, attached to a pistol. Combined with the short overall length it’s perfect for all-day carry in the woods or on a trail.

The Hybrid is another product with details still to be announced. It’s an all-purpose silencer for handguns and rifles, rated all the way up to .458 SOCOM and even .45-70. SilencerCo will officially launch the Hybrid in January 2016 with multiple mounting options, including quick-detach and direct-thread along with pistons for use with handguns.

SilencerCo is branching out with the Radius. The first SWR “electro-optical” product, the Radius is a commercial rangefinder with an impressive 1-mile range. It’s a Picatinny rail-mounted device that can be oriented in any position giving users the most options when it comes to positioning.

The Radius runs on two CR123 cells with a constant-on runtime of 12 hours. Built to withstand physical abuse and the elements, it’s guaranteed to be a hit with long-range shooters and hunters.

Priced at $999 the Radius isn’t particularly expensive for the mile-out shooter, and real-world prices should be less. The Radius will also ship this October.