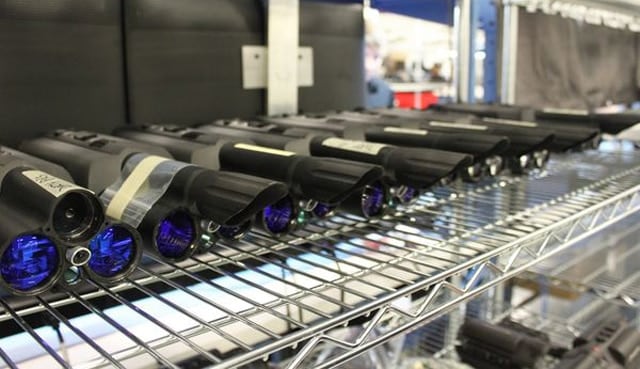 Rifle scopes sit on a shelf at TrackingPoint’s facility in Pflugerville, Texas, which opened in 2013. (Photo: Statesman)

While operations were suspended, the company restructured both its finances and leadership, said John McHale, who left his role as company chairman for chief executive officer, a position he held when the company launched in 2013.

The CEO immediately before the shutdown, Frank Bruno, will assume the role of chief operating officer, and John Lupher, who once also served as CEO, will reassume his role as vice president of engineering.

The shutdown in May followed an abrupt change in leadership along with downsizing despite periodic updates describing healthy sales figures — roughly 180 percent more than expected in 2014. The company said he layoffs were due to an inflated and unnecessary workforce, something McHale reiterated Tuesday.

“What we have going for us is $35 million in research and development that’s been completed around these products so the need to continue to innovate, given the lead we have, is diminished, so we don’t need as many engineers to drive forward at this point in time,” McHale told Guns.com.

He said the company can now operate with 20 people rather than the 105 they once had.

Responding to rumors that the company’s struggles were due to poor sales because, simply put, the average consumer cannot afford the $8,000 to $30,000 price tag of TrackingPoint’s precision guided rifles, McHale said it was an issue of logistics rather than a lack of interest.

“In 2014, we really grew extremely rapidly. More quickly than we expected and we really didn’t have the management systems in place to handle the growth,” he said. “The materials handling, the purchase ordering, and planning system just really weren’t in place and robust enough to handle that kind of growth, so it was sort of an organizational maturity issue.”

The company overestimated materials needed to match orders for 2015 and the surplus consumed available cash. “We had to downsize pretty dramatically and work ourselves out of that situation,” he said.

Moving forward, the company created a materials and resource planning system to “track inventory and accurately project” what is needed, he said.

McHale declined to comment on new products or lowering the prices of TrackingPoint’s products, but said the company will introduce new products in November. “We’re really just starting to put those plans together,” he said.