4 charged with murder after accomplice is killed during home invasion 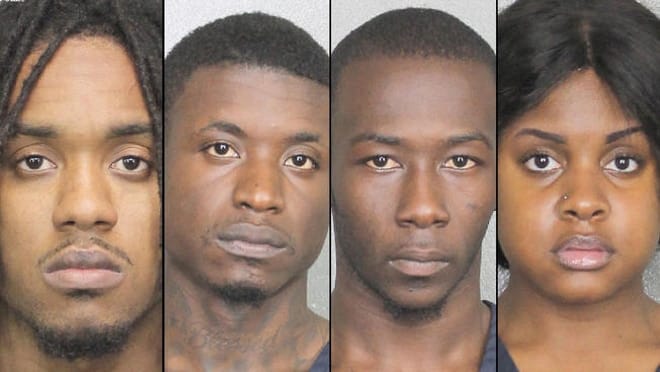 A morning home invasion at an apartment in Pembroke Pines, Florida, Friday ended with one of the suspects dead and the remaining four suspects charged with murder for his death, the Sun Sentinel reported.

Four of the five suspects, whose faces were covered with bandannas, went into the apartment through an unlocked door just before 1 a.m. with the intention to rob one of the residents. The suspects claimed – and later admitted to authorities – that the resident owed them money and they were there to collect the debt.

But a neighbor, Kibwe Clark, saw the masked men through the window inside his apartment, so he grabbed his Glock and shot through the glass, striking one of the robbers, 23-year-old Milot Desir. After Desir fell down a flight of stairs, his cohorts grabbed him and they fled the scene.

Police were called to the home and while en route received a second call from a nearby hospital about a man who was brought to the facility with a gunshot wound. Authorities determined that after the suspects fled, they drove Desir to the hospital, where he was pronounced dead.

Authorities arrested the remaining four suspects: Milton Desir, 20 — the brother of the man that was killed — Cleveland Glover, 23, Eddrick Butler, 21, and Alexis Brantley, 18.

However, Brantley did not actually enter the apartment, but investigators think she assisted in planning and facilitating the crime — details they deduced from a series of text messages. An investigation also revealed that Brantley coordinated with the residents inside to get the door unlocked and also knew that one of the residents was armed.

All four suspects are now charged with felony murder in addition to home invasion robbery, and are being held without bond.