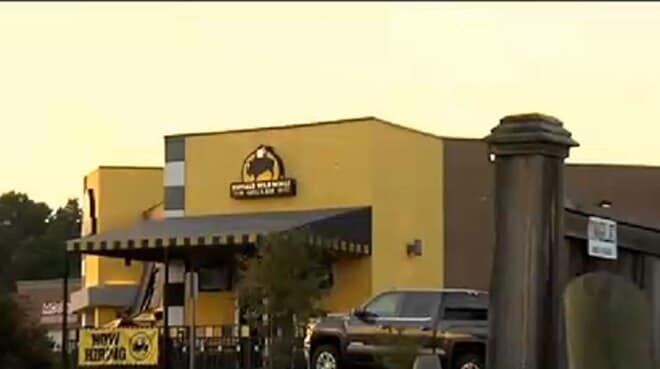 An attempted robbery outside of a Buffalo Wild Wings early Monday morning ended in an exchange of gunfire, but no injuries. (Photo: KATV)

Authorities in Little Rock, Arkansas, are investigating a recent rash of robberies around the city, with more than a dozen reports of armed robberies in just four days.

The 15 calls of armed robberies from Friday to Monday were added to the nearly 500 robberies the city has seen this year alone, and has left many businesses, as well as local residents on edge. And while investigators believe that some, though not all, of the robberies may be related, not every attempt was successful either.

Police received two of the calls on Monday within mere minutes of one another. The first call came in just before 6 a.m. when a black male wearing a hoodie entered a Shipley’s Do-nuts carrying an AK-47, and made off with an undisclosed amount of cash, KATV reported.

Minutes later, police received another call from a nearby Buffalo Wild Wings. The manager was apparently standing outside smoking a cigarette when he was approached by an individual who was armed with a handgun and announced a robbery. However, the suspect did not walk away with anything because the intended victim was armed with his own gun as well. According to Lt. Steve McClanahan with the Little Rock Police Department, there was an exchange of gunfire between the suspect and the would-be victim, but no one was believed to be injured.

Seven more armed robberies occurred the previous day, on Sunday, while an additional three happened on both Saturday and Friday. Most of the robberies involving businesses occurred near either opening or closing time. Lord Dalu is the manager of Gus’s Famous Fried Chicken, which was robbed at gunpoint Saturday, and believes criminals are purposely targeting businesses at those times.

“They feel like it’s the least amount of people in the building,” Dalu said. “This past weekend he just so happened to come on the wrong day and there was a lot of people here,” he said about the weekend robbery.

As it turned out, the robber left empty-handed because after rounding up what he thought was all of the employees, he was startled by two remaining employees that he missed. After being started by the employees, the suspect simply ran out of the door.

Regardless, McClanahan said, referring to the number of robberies, “This is high for us, there’s no sugar-coating that.” McClanahan added that they use “predictive policing models” to try to determine when and where crimes will occur, but it’s not an exact science.