The Ljutic Space Gun: For aliens who shoot trap...

Is it a Swiffer Sweeper? A Stormtrooper bring-back from Tatooine? A spud gun for carrots? All of the above are incorrect. This beauty of simplicity is the Ljutic Space Gun. With a name like that, it could only come from California.

Who was Ljutic and why the Space Gun?

Al Ljutic was a renaissance man of the 20th century. A California native of Croatian heritage, he was a rifle maker, competition rifle shooter, and heavyweight boxing champion. He was a member of the ill-fated 1940 US Olympic Team and designed several firearms for other manufacturers including Winchester’s Model 100 rifle.

Working with his father, who had similar talents, the two ran the Ljutic Gun Company in the Fresno area. One day in 1955, a close friend and Remington field rep by the name of AA Reil called to invite Ljutic to go trap shooting with him the next day. It was only after he agreed that Ljutic figured out that he didn’t have a trap gun at his disposal, so rather than go back on a promise, he designed and built one by the end of the day.

It was a basic single shot firearm and was ugly, but it worked and would become the basis for the Space Gun.

Design of the production Space Gun 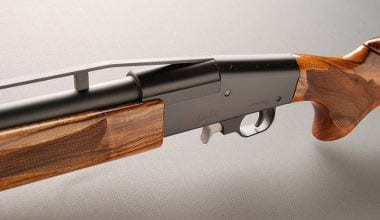 On the Ljutic space gun, the ejection port sends spent hulls straight down.

The guns, true to Al Ljutic’s ersatz workshop prototype, are elegant in their simplicity. A long 30-inch smoothbore barrel with a short-throw bolt-action receiver, the Space Gun has a single loading and ejection port oriented directly out the bottom. The spent shotgun shell hull ejects when you cock the gun. Deeply stained American walnut was used for the pistol grip and forearm, giving the otherwise sterile gun a sort of warmth. A pull-and-release button trigger helps set up fast shots on sporting clays.

The firearm used a proprietary anti-recoil mechanism with an abbreviated tubular buttstock and universal comb. Shooters profess that the Space Gun, unlike most single-shot shotguns, has recoil significantly less than that of semi-autos. To those who would trap shoot and need the shotgun for nothing but, it’s a brilliant design and Ljutic realized this.

Al Ljutic died in 2007 at age 94, but his company, Ljutic Industries, lives on. From 1955 until today, less than 20,000 Space Guns have been produced. Today the firm still exists in Yakima Washington but concentrates their efforts on a series of more traditional trap guns such as their Mono, Pro 3, Bi-Matic, and LM-6 lines.

The Space Gun is no longer even mentioned on their site.

Authentic Ljutic space guns can fetch a couple to several thousand on the collector’s market.

Space Guns are single-purpose guns built for trap shooting and not much else. While it certainly is possible to take one into the woods for game, or try to swing it around hallways in a home-defense scenario, it is just not probable. Even with this in mind, it’s almost impossible to get a Space Gun trap shotgun in any condition for less than $3000, with very nice models in perfect condition running almost twice that.

The rifle versions of the Space Gun are accurate and popular with shooters who can afford them, but frequently run $2500-$3000 all the same.

With that in mind, if you are ever at a gunshow and see one with the right price, it may be an investment, just be careful for Stormtroopers on Banthas.

This article originally ran on Guns.com as “Sci-fi Marvel: The Ljutic Space Gun” on 1/16/2013 and has been edited for content.