Republican debates touch on gun confiscation, little else on guns 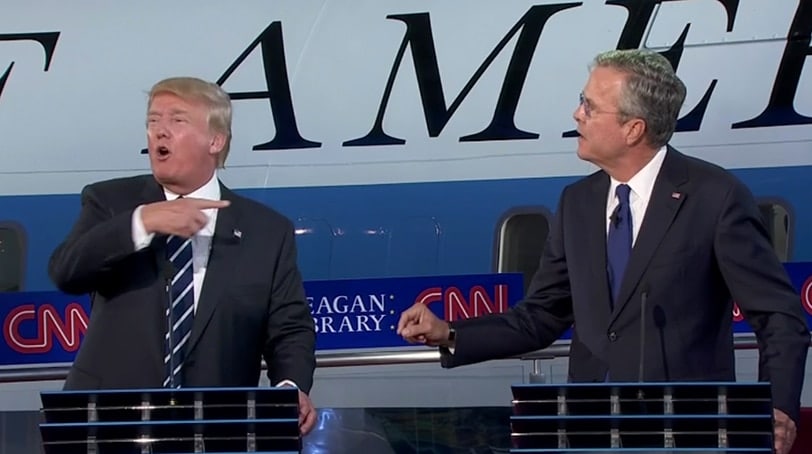 Presidential candidates Donald Trump and Jeb Bush square off at the second round of Republican debates, hosted by CNN Wednesday, Sept. 17, 2015. (Photo: CNN)

Broadcasting from the Reagan Library in Simi Valley, California, CNN hosted the second round of Republican debates Wednesday night, offering candidates a national forum to discuss the big issues.

Chief among those is the topic of gun control, which, according to recent polling, was “extremely important” to American voters and received little attention during this round of debates, much like the first round, hosted by Fox News last month.

Bush said he thought there should be a state-by-state solution to preventing the mentally ill from obtaining firearms.

The former governor of Florida, where there are 1.2 million concealed carry holders, said anyone who has their weapons taken away should get due process before that happens.

“I think there needs to be hearing, but the fact is, I think we need to encourage that kind of involvement,” Bush said.

The statement was made much to the chagrin of conservatives, who express a constant fear of gun confiscation.

Following a mass shooting in Isla Vista last year, California introduced a measure characterized by some as the “turn in your neighbor” law because it allowed the friends or family of a person suspected to be mentally unstable to report them, resulting in the confiscation of their guns.

Bush, who signed the nation’s first stand-your-ground defense law in Florida, supports absolute gun ownership and is a proponent of instant background checks, particularly those performed at gun shows, according to On The Issues, a Massachusetts-based political non-profit.

Gun laws won’t deter criminals from getting their hands on guns, said Rubio, also a proponent of absolute gun ownership who opposes new gun control laws. He added that a left-wing government has degraded family values, according to Forbes’ live blog of the debates.

Several of the candidates evoked the memory of Republican President Ronald Reagan, who, incidentally, pushed for background check legislation following the shooting of he and his press secretary, Jim Brady, who took a bullet to the head after a failed assassination attempt on the president.

“This nightmare might never have happened if legislation that is before Congress now – the Brady bill – had been law back in 1981,” Regan wrote in an op-ed for the New York Times on the 10th anniversary of the shooting. The Brady Bill, enacted in 1993, spawned the national background check system currently in place.