5 reasons why you need to reload now 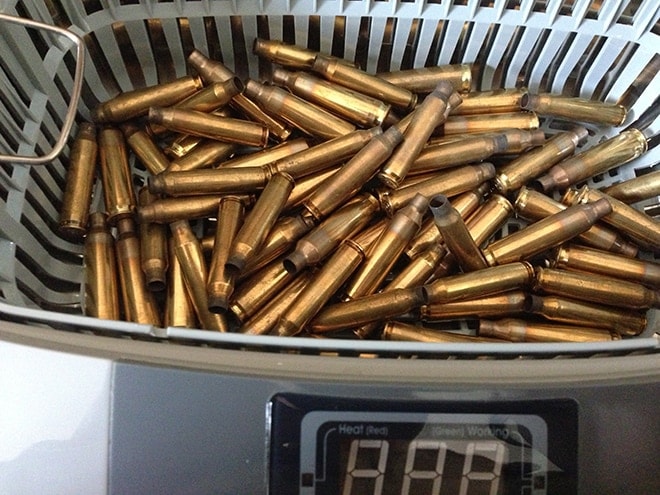 If you are a range lurker, scrounging for brass, you may already be a reloader. (Photo: Kristin Alberts)

This is not a call to arms, nor is it a fear-raising distress call for shooters.  However, there are at least five good reasons why the time is now to head to your reloading bench.

1.  Due to the ammo shortage

Though the shortage seems to be lessening in most areas of the country and more popular ammo is back on the shelves, ammo levels are nowhere near what they were five years ago, and perhaps never will be again.  While there’s not much we can do about the ever-elusive or overpriced 22 LR rounds, we can generate our own centerfire and shotgun ammunition.  Just because the big box store is out of whatever-caliber-of-ammo, you have the ability to create your own.

No matter where you fall on the political spectrum, it’s impossible to ignore shooting headlines in the news and impending threats not only to firearms themselves, but also to proposed bans on ammo and components.  There’s a clear line between fear-mongering and sensible preparation. The gist of my point is this: if you can find the components and you’re interested in the art of reloading, now is as good a time as any to stock up and hone your skills.

I’m not a hoarder—at least not according to those who climb over junk-heaps on the reality show—however, I like to maintain an adequate supply of both my favorite shotgun powders and reclaimed lead shot.  The bottom line remains: if you don’t have the forethought to plan ahead and have adequate components for your reloading needs, you’re no better off than those scrounging store-to-store for factory ammo on the shelf. 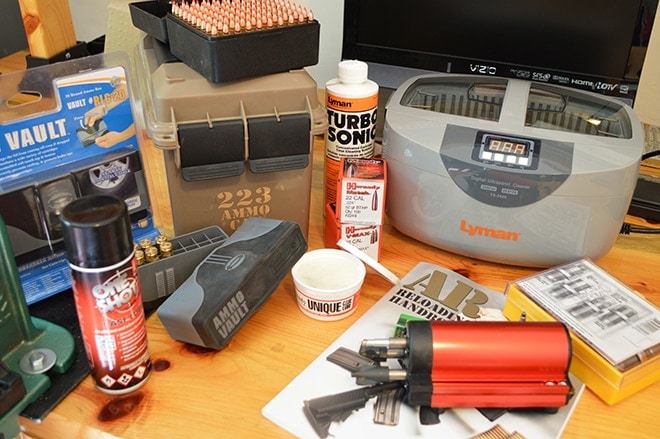 A basic reloading set-up does have an upfront cost, but this will be negligible for someone with a healthy shooting/reloading habit. (Photo: Kristin Alberts)

For some, reloading is a hobby.  Or a stress reliever. For other’s, it’s a passion.  I enjoy the plain self-satisfaction of creating my own ammunition.  Reloading is the arts-and-crafts of the shooting world.  Shotgun, rifle, pistol.  There’s nothing like the view of fully stacked plastic ammo boxes on the shelf.  Plus, reloading is like the shooter’s version of going green.  We reuse the brass.  We re-purpose lead with re-claimed shot. We melt and cast discarded wheel weights into new bullets.  We build ridiculously practical loading benches in the corners of our homes and love to see photos of others.  It’s all part of the satisfaction and pride in the trade.

Reloaders can tailor loads for speed, energy, velocity, ultimate accuracy, or even reduced recoil.  Sure, specialty factory rounds are offered in lighter recoil or super speeds, but I prefer to know exactly what I’m shooting.   If you handload and you’re willing to put in the time, you can wring the maximum potential from any rifle.

That being said, I’ll be the first to admit I have several rifles that love a certain brand and weight of factory ammo.  However, as a reloader and knowing how often factories change their loads, I prefer not to become dependent on these as my most accurate rounds.  Do I shoot factory ammunition?  Absolutely.  Reloading requires a great degree of precision, research, and testing.  Sometimes it’s easier or even cheaper to shoot factory, especially for calibers you don’t use very often.

The majority of the time though, reloading makes more sense, especially in the case of unpopular calibers.  Wildcats and oddball rounds quickly fall out of factory favor when sales fall, but if you have the dies, you can always reload what you can’t buy in the store.

This is a touchy subject, lest we launch the chicken or the egg debate. If we shoot more, we load more.  If we load more, we shoot more. What an intriguing Catch-22.  If we reloaders can control our great impulses to buy the latest and greatest gadgets, cost savings are certainly possible, especially given the rising costs of specialty factory ammo.

Realistically, it takes time to recoup the initial cost of getting setup to reload. The real cost savings add up quickest, perhaps, when focusing on a single cartridge en masse.  For example, when preparing for a high volume varmint shoot out west, it’s not uncommon to load 5,000 rounds of .223 or 1,000 rounds of .204 or .22-250.  Many of my reloading counterparts go large-scale production on 45acp for handgun competitions or 45 Long Colt for cowboy action shooting.  If you’re an avid shooter, it’s difficult to ignore the world of hand-loading.

5. Because the current state of the county and political climate makes you nervous 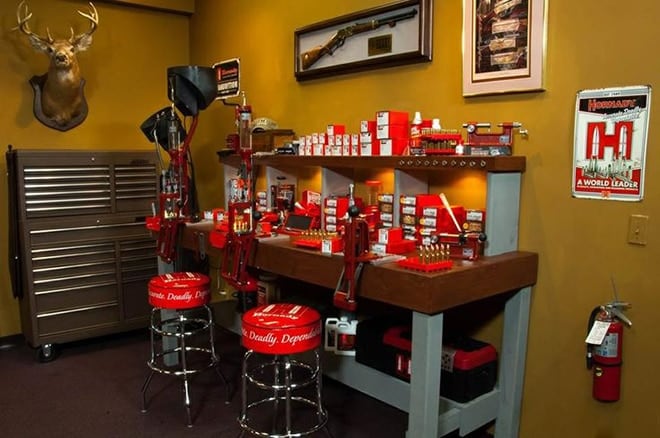 If news of a potential ban on green-tip .223 ball ammo makes you wonder what’s next, you’re not alone.  In a culture in which our leaders’ respect for the Second Amendment leaves more than something to be desired, having both the ability and the equipment to reload grants a certain peace of mind.  If you have reloading supplies and the knowledge to use them, you’re less dependent on both market price fluctuations and the latest in the gun-and-ammo grabbing phenomenon. If the thought of UN Treaties and handgun ammo bans makes you more than nervous, this is one sure way to grab the proverbial bull by the horns and hold firmly to those first freedoms.

If you find it difficult to pass by sale tags in the bullet aisles, and are a known range lurker, scrounging brass, you’re already a reloader.  But if you’re not, I’m sure you will find reloaders a friendly lot, more than willing to offer advice and expertise on their craft.  Components are still available, making today as good a day as any to hit the reloading bench.  And if you don’t yet have a reloading bench, find a way to convince your significant other that you need one.  A nice, big one.

If you reload, what are your top five reasons?