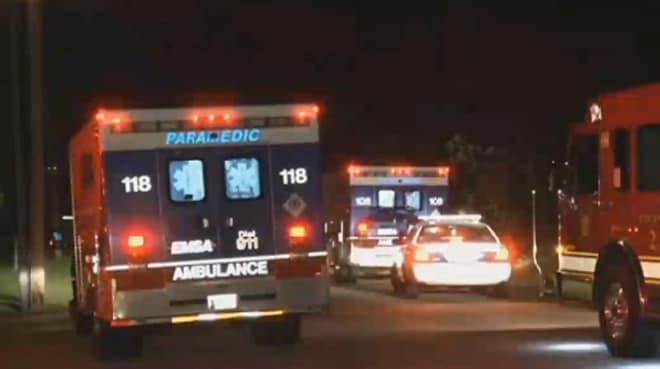 According to local reports, the man’s home was filled with so many belongings that it made it difficult for paramedics to get him out of the house. (Photo: News 9)

A home invasion at a Tulsa home late Saturday night ended with the suspect in critical condition after the 85-year-old homeowner shot him twice.

Authorities received a 911 hang-up call, presumably from the homeowner, around 11 p.m. The call came in, but there was no response on the other end. The call prompted dispatchers to send the police to investigate and when they arrived at the home multiple knocks at the front door went unanswered. However, officers could see into the home and saw the homeowner lying on the floor, bleeding with multiple injuries.

Authorities discovered the elderly homeowner was trapped beneath a chair, suffering from a gunshot wound to the torso and bleeding extensively from a head injury. The suspect was also found with two gunshot wounds to the torso. First responders noted the suspect’s injuries may have included a severed spinal cord and a punctured lung.

The victim and suspect were both transported to the hospital. The victim’s injuries, although serious, were not believed to be life-threatening, but the suspect was last listed in critical condition.

According to reports from local media, the homeowner said the suspect, who was armed with a gun, forced his way into the man’s home before a physical struggle ensued. The elderly homeowner was eventually able to subdue the suspect and shoot him twice, but not before he was assaulted and shot a single time as well. It is unknown if the homeowner had a gun of his own or if he took the suspect’s gun during the struggle.

In a somewhat similar incident at a home in an Albuquerque suburb, the 59-year-old homeowner, who uses a cane to get around, was awakened when a man broke into his house early Wednesday morning. The homeowner used his cane as a weapon while fighting with the suspect and was eventually able to wrestle the gun away from the suspect before fatally shooting the suspect with his own gun.

The incident left the homeowner traumatized and although he suffered multiple injuries, including a broken arm and facial lacerations, walked away from the incident.